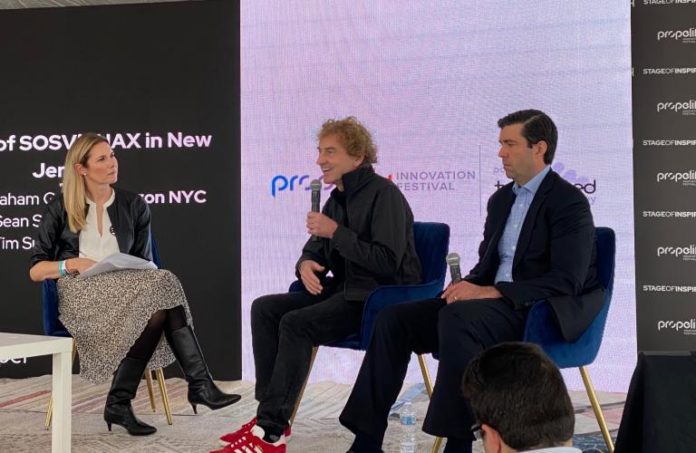 Sean O’Sullivan knows he may be wrong. And he’s got millions in investments in failed startups to show he’s not always right.

But, when it comes to a return of manufacturing in the U.S. — and the necessary growth of hard tech that will go with it — O’Sullivan feels he’s right. And he’s got a list of companies he’s helped that are worth more than $8 billion to show he usually doesn’t miss the mark.

O’Sullivan, speaking Wednesday at the Propelify festival in Hoboken, was talking about bringing his global accelerator, HAX, to Newark, where it will invest at least $250 million in 100 early-stage companies that aim to change the decades-long manufacturing decline in the state and the country. (See full story on HAX coming to Newark here.)

O’Sullivan said he views manufacturing as an opportunity that has a 20-year run in front of it.

He told the crowd, whenever you’re investing in early-stage startups, you have to be looking at what will happen in the future.

“What is the unstoppable megatrend?” he said.

For many, the fact that manufacturing is the answer became obvious during COVID, when the country had to figure out how to do something as simple as produce masks.

O’Sullivan said his companies, SOSV and HAX, figured that out long before the pandemic. They have been investing in manufacturing for nearly a decade. He pointed to wearable for health technology — or even smart tech, such as how to use a tennis racket.

“Every physical device is being reinvented for these new patterns of how we live and how we work and how we compete going forward,” he said. “Everything has to be thrown out and reinvented again. That’s what HAX recognized about eight years ago, when we started in Shenzhen (China).”

It was the ultimate example of buying low.

As O’Sullivan said, the pandemic may have brought attention to the country’s supply-chain problems, but they have been apparent for generations. O’Sullivan said manufacturing’s GDP has been dropping for 73 years.

So why invest? O’Sullivan thinks the tide is turning — thanks to the pandemic, which pointed out the perils of offshoring and outsourcing.

“We got screwed as an economy by having too much fragility in our supply chain,” he said. “And we’re all seeing it here today — you’re seeing it in the rising costs of automobiles. Everybody’s facing these supply-chain problems.”

O’Sullivan said his group could be wrong. And would be out hundreds of millions of dollars if it is.

But he doesn’t think so.

O’Sullivan said he foresees a future with a lot of automation, efficient manufacturing using robotics and other advanced manufacturing techniques.

And he foresees Newark as the place to create these new technologies.

O’Sullivan gave credit to the Economic Development Authority and the Governor’s Office — and credit to Newark for being a livable city. And then there was the whole “back to the future” idea of the state’s history in the space.

“Throughout history, (New Jersey has) had a huge number of industries that have done very well,” he said. “We’re hoping to bring it back.”

His confident he will do just that.

“These trends are unstoppable,” he said.

Verizon, as part of ‘5G Impact Challenge,’ will equip 5 Hoboken...