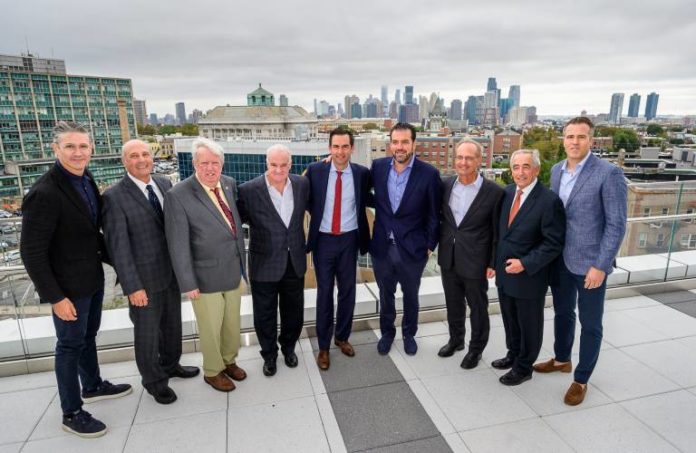 The magnitude of the movement wasn’t lost on Hudson County Executive Tom DeGise.

“There’s nothing better than a groundbreaking, unless, of course, you have a ribbon-cutting, and today we have both and that makes this event very, very unique,” DeGise said.

The dignitaries gathered to celebrate the transformative project’s third building — a 60-story high-rise that will have 600 units in Jersey City’s historic Journal Square neighborhood — as well as the five-month lease-up of Journal Squared’s 704-unit second tower.

Located at the intersection of Pavonia and Summit avenues with direct access to the Journal Square Transportation Center, the three-tower development will ultimately total 1,840 rental residences and 36,000 square feet of retail and restaurant space in 53-, 60- and 68-story buildings.

Fulop said the three-story project is about more than just the number of residences. Journal Squared, Fulop said, is the recognition of the city’s potential.

“This is just the early stages for what is on deck in Journal Square, which has a future that’s very, very bright. We couldn’t be more excited that this building has completed leasing and that the KRE Group is still committed to Jersey City and immediately breaking ground on the newest tower.”

Like the first two buildings, the third tower of Journal Squared will rise above the Jersey City skyline, providing dramatic views of the Hudson River, Statue of Liberty, Ellis Island and Downtown Manhattan.

The new tower will feature a collection of 600 stylish rental residences complemented by 18,000 square feet of amenities that will bolster the nearly 100,000 square feet of indoor and outdoor amenities spread throughout the first two buildings and shared by all residents. The new social spaces will showcase a creative theme, highlighted by a performance lounge, karaoke room and recording spaces. Residents will also enjoy a makerspace area, coworking lounge, lobby café and a sky lounge. Construction is slated to be completed in spring 2024.

Kushner said he was thrilled to see the project progressing.

“Our intent all along was to complement the existing mass-transportation infrastructure with new residential, retail and open space to create a well-balanced lifestyle for residents that would also have a lasting impact on the city as a whole,” he said.

“The robust leasing activity we experienced in Tower 2 over the past five months demonstrates the enormous demand that exists here. That speaks volumes about the product we’ve delivered, and the growing appeal of the neighborhood itself. We’re delighted to now begin work on the third tower, which will bring our full vision to fruition.”

Designed by Hollwich Kushner Architects and Handel Architects, Journal Squared has effectively ushered in a new era for Journal Square while paying homage to the history and rich cultural background of the neighborhood. The second tower features pieces by local artists, while the amenity spaces are adorned with items such as a vintage printing press from the Jersey Journal, the neighborhood’s namesake, along with historic photos of the area.

Kanne said National Real Estate Advisors looks forward to continuing to contribute to the growth and vibrancy of Jersey City.

“Journal Squared is a hallmark build-to-core project for National, delivering on our commitment to create value, provide jobs and strengthen economic vitality in the places where we invest,” he said.