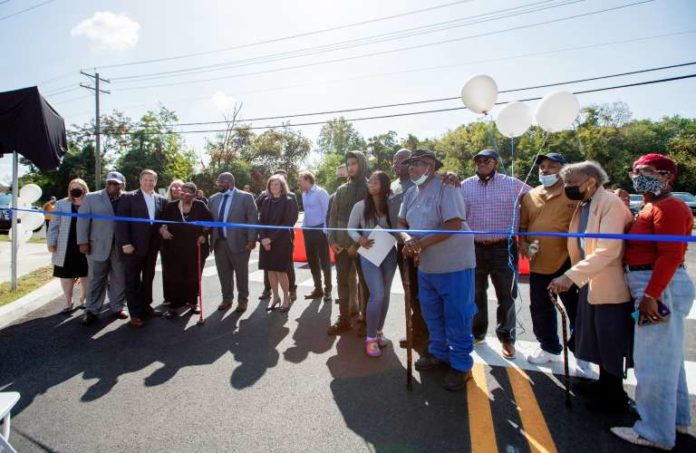 In Lawnside, a small borough in Camden County, the dedication of a new road also represents new business for the municipality.

On Friday, Lawnside Mayor Maryann Wardlow and a host of dignitaries celebrated the street dedication of Walter A. Gaines Way and the opening of the first building in the Historic Borough of Lawnside Station Business Park.

The new public road leads to an exciting mixed-use, master-planned redevelopment project on 135 acres located just steps from the Woodcrest PATCO Rapid Transit Rail Station, next to two exits off Route 295 and close to Exit 3 on the New Jersey Turnpike.

The redevelopment will be owned and managed by Vineland Construction Co.

As part of the overall project, a pedestrian/bike path, public pocket parks and a public open space greenway are being constructed to run along a branch of the Cooper River and the new Walter A. Gaines Way, which will allow residents and employees to walk or bike to the PATCO train station.

When completed, there will be nearly a mile of new trails, bike lanes and sidewalks in the area.

“Lawnside is the ideal home for this transformative project that will bring investment and new businesses to this community and serve as a job generator in the borough of Lawnside,” Vineland Construction Co. President John Krauser said.

With a long, distinguished career as a civic leader in the borough of Lawnside, Gaines was an educator, mentor, coach and mayor whose impact on the lives he touched will live on for generations.

He was honored by Wardlow.

“Mr. Gaines, as a mayor, offered me such opportunities as a female,” she said.

This project fulfills a vision of the late Bernard Brown, owner of Vineland Construction Co., to bring jobs and economic growth to Lawnside and the greater South Jersey region, and will be carried forward by his daughter, Anne Koons.