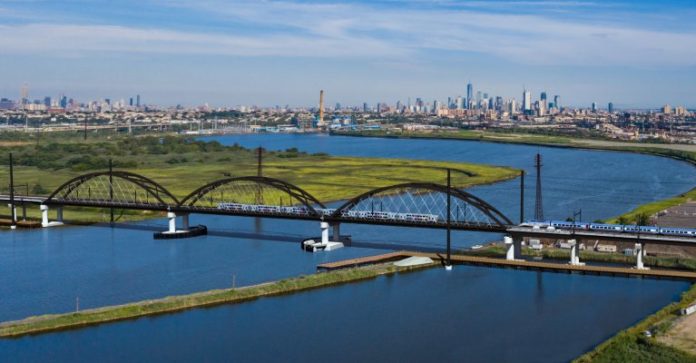 The 110-year-old Portal North Bridge finally is being replaced.

In what is a huge win for commuters and the next step toward two new tunnels to New York City, the board of directors of New Jersey Transit on Tuesday approved a $1.6 billion contract with a Skanska/Traylor Bros. joint venture for the construction of the new bridge.

The Portal North Bridge project is an important initial element of the broader Gateway Program, which will eventually double rail capacity between Newark and New York. The project will eliminate the existing swing bridge, which has been the enduring source of major service disruptions for NJ Transit and Amtrak customers traveling on the Northeast Corridor.

The new bridge is a modern two-track, high-level, fixed-span bridge that will improve service and capacity along this section of the Northeast Corridor. The new bridge will rise 50 feet over the Hackensack River and will allow marine traffic to pass underneath without interrupting rail traffic.

The project is being funded by the U.S. Department of Transportation, NJ Transit and Amtrak. In January 2021, Gov. Phil Murphy announced the signing of a Full Funding Grant Agreement that secured $766.5 million in Federal Transit Administration funding to support the project’s construction.

Murphy obviously was thrilled to announce the news.

“This award will not only bring a bridge that will resolve the longstanding bottlenecks plaguing New Jersey commuters, but will also create well-paying skilled labor jobs in the process.”

A number of stakeholders offered thoughts. Here are some:

Get with the plan: Women’s Center for Entrepreneurship in Chatham is...