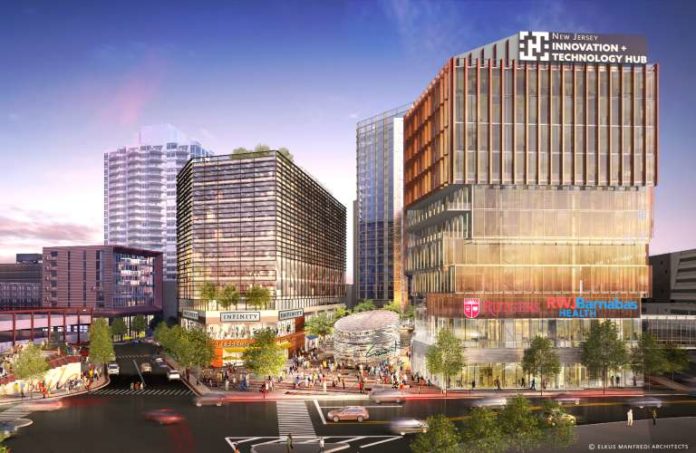 Gov. Phil Murphy and Rutgers University President Jonathan Holloway will announce Thursday morning a landmark $665 million investment by the state in innovation, translational research and medical education at the Hub in downtown New Brunswick — an investment that includes the relocation of Rutgers Robert Wood Johnson Medical School to the site.

The investment represents just the first phase of the development of a site that state, higher education and health care officials envision will make New Jersey a national player in medical research and innovation.

Here’s what will be announced:

The first phase of the Hub project will include two buildings that combine to total approximately 580,000 square feet.

The goal of the two buildings is two-fold: To provide modern education facilities for medical students, ones where they have access to research from Day One — and to provide researchers with a collaborative space to study and create and, when needed, the ability to commercialize their findings and products.

The first phase is expected to be completed by the end of 2024.

The second phase of the Hub will include a third building totaling approximately 500,000 square feet. This building will have private-company tenants representing all of the life science ecosystem, including Big Pharma, little pharma, biotech and medical devices.

The goal, again, is to have private companies working with researchers to develop new products and health care solutions.

The construction of this building will come later, but officials said they hope it will commence before the first phase is completed.

The New Brunswick Development Corp., better known as Devco, is the master developer on the project.

Rutgers University, RWJBarnabas Health, Hackensack Meridian Health, Devco and the New Jersey Economic Development Authority already have been announced as core partners in the effort. They will be joined Thursday by Middlesex County.

Choose New Jersey and Princeton University will be the initial tenants in the first phase.