Home Politics Murphy on Energy Master Plan: ‘It’s to be determined on how it...
Facebook
Twitter
Linkedin 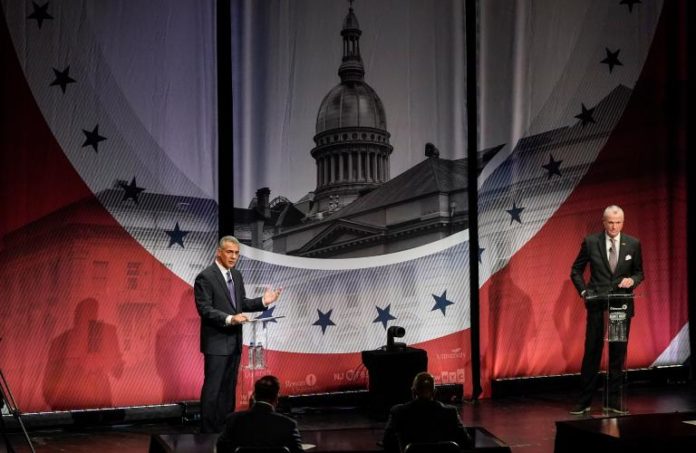 The Governor’s Office — and the supporters of the governor’s Energy Master Plan — take great offense at the cost estimates suggested by opponents of a plan that calls for 100% clean energy by 2050.

One study estimated it will cost as much as $20,000 per household to implement. Another said it would cost $525 billion overall.

The administration, however, has never released a comprehensive cost analysis of the plan, which was introduced in January 2020.

Last night, during the gubernatorial debate at Rowan University, Gov. Phil Murphy gave a response that was short on specifics when he was asked directly how much it would cost by Ben Dworkin, the director of the Rowan Institute for Public Policy and Citizenship.

Here’s the exchange — and then the response from Republican challenger Jack Ciattarelli. Direct quotes were edited slightly for grammar and readability.

Ben Dworkin: Mr. Murphy, your administration has a current goal of 100% clean energy by 2050. You’ve promised estimates for how much it will cost, and who’s going to pay for it, but you haven’t yet provided it. So, tonight, can you tell us: How much will it cost and who will pay for it?

Gov. Phil Murphy (after responding to comments by Ciattarelli on earlier questions): I’m proud of this (plan) because it’s the most aggressive plan of any state in America. It’s got a huge amount of nuclear plants to bridge us (over the next 15 years), which matters a lot in South Jersey, and an enormous amount of offshore wind, which is also a big game-changer here in South Jersey.

It’s to be determined in terms of how it gets paid, but it won’t be on the back of the ratepayer. That’s the important thing. The ratepayers’ representation is front and center of this … (we’ve) got to keep moving forward.

Jack Ciattarelli: I’m shocked by his answer. Everyone has been calling for a comprehensive cost analysis. And here’s the reason why he hasn’t shared it: When you have to electrify your house, by turning every single one of your appliances into an electric appliance, what it’s going to mean to do that — to rewire the house, replace those appliances and then pay for the monthly electric bill — is your initial investment will be somewhere between $30,000 and $50,000. And that’s not even counting your monthly electric bill.

I think the governor has an obligation with this Energy Master Plan to put forth a comprehensive cost analysis.