Home Health Care An inspiration to all: Kinsey retires from Saint Peter’s after more than...
Facebook
Twitter
Linkedin 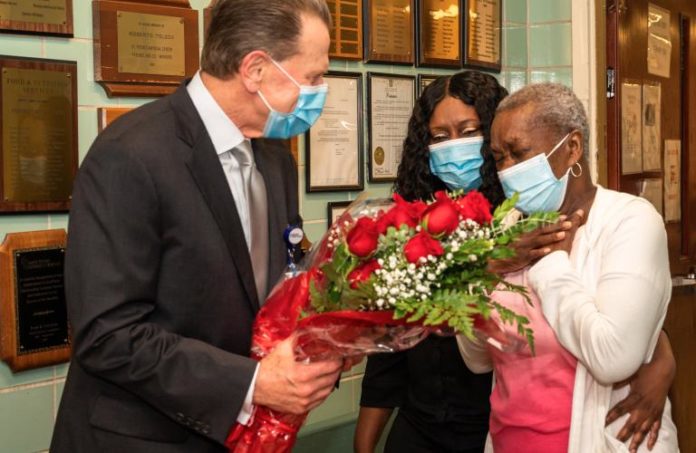 Julia Kinsey, who should be an inspiration and aspiration to all, was given a much-deserved clap out Wednesday on her final day at Saint Peter’s University Hospital in New Brunswick.

Kinsey isn’t your typical employee. The supervisor of food and nutrition services, she has served the hospital with dedication and distinction for more than 60 years. In fact, she never missed a day of work during the pandemic.

Kinsey, who started at the facility when she was 19, celebrated her 80th birthday earlier this fall.

She said she believes it’s the little things that can make a difference in someone’s day. Her philosophy is to treat others like she would treat her own family, and that commitment has resulted in many of her co-workers seeing her as more than a supervisor.

Kecia Stephenson has been a co-worker of Kinsey’s for 33 years.

“She’s my second mom,” she said. “When I came onboard, I was the youngest person in the department, and Julia took me under her wing. She was and is my role model, and that goes way beyond things she’s taught me professionally. I’ve learned a lot of life’s lessons from her, as well. We are family, inside and outside of work.”

Kinsey said the family atmosphere at Saint Peter’s makes it a special place.

“We share a sense of compassionate care and dedication to those we serve,” she said. “It’s this comradery and commitment that is at the heart of Saint Peter’s.”

Kinsey was honored by Saint Peter’s in 2020 as its Unsung Hero for the ROI Influencers: Health Care 2020 list.

Kinsey credits her work ethic and ability to connect with others to three key elements in her life: My family, my work family and my church family, she said.

The proud mother of three children, two daughters and a son, Kinsey said the only time she took time away from her job of 60 years was to raise her three children. Active in her church of 40 years, North Stelton AME Church in Piscataway, she is a member of the board of stewards and was elected coordinator of the church’s Culinary Department.

Retiring is certainly something Kinsey has contemplated, but she has no definitive plans, at least for now.

“I’ve always liked to cook and to feed people,” she said. “It’s the one thing that brings us all together.”