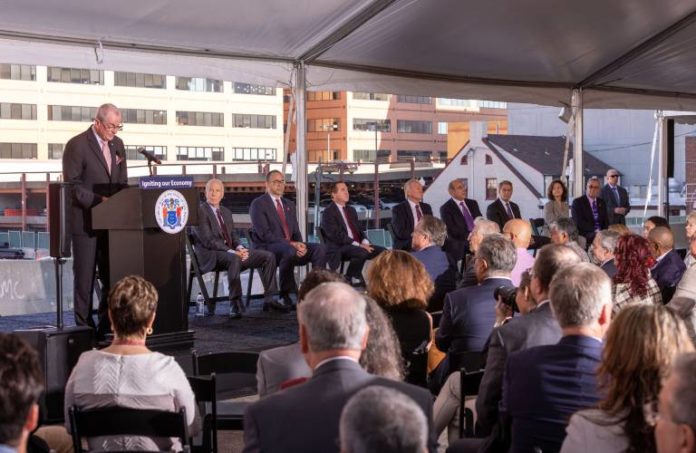 The six leading members of the Site Selectors Guild — the group that represents the most influential site selectors in the world — already were impressed with New Jersey by the time they entered the New Brunswick Performing Arts Center on Monday night.

A day of meetings at the Heldrich Hotel had shown them a lot of what the state has to offer — and what it will have to offer, especially in terms of the transformative medical research that is expected to take place at the Hub in New Brunswick.

But, before they could sit down to a meal of Wagyu steak and tuna, cooked on individual salt blocks, heated to 600 degrees (let’s be clear, Jersey can do food as well anyone), they got another surprise: Gov. Phil Murphy joined them for the cocktail hour.

That the room already was filled with leading members of government, higher education and health care — all working together — was one thing. But the fact that the governor was willing and eager to stop by, 22 days before the election, meant something else.

So said Chris Paladino, the president of New Brunswick Development Corp., the master developer of the Hub, and organizer of the night’s festivities.

“One of the things they said that they were truly interested in and impressed with is the collegiality and the united front and the working relationship with the (Economic Development Authority), the Governor’s Office, the local government, not-for-profits, and (Rutgers University) in moving a project forward,” he said.

“They just don’t see that in other states, they said. And to have the governor come at such an important time and hit all the right notes with respect to his commitment to not only this project, but innovation projects when it comes to large pharma and biotech, was impressive.”

It also was an example of the potential reach of the Hub project.

The site selectors were not there to get information on phase one of the project, but phase two — when the state will be seeking large pharma and biotech companies to come help researchers advance their projects to the commercial stage.

The visit had been scheduled long ago. The fact that it took place the week of the Hub groundbreaking was fortuitous, Paladino said.

“This was not a woulda, coulda, shoulda, maybe it will happen,” he said. “They saw that we’re making progress, and that this is going to happen.”

As CEO of Choose New Jersey, Jose Lozano knows all the steps that are needed to attract companies — and to create enthusiasm among the people who help companies decide where to go.

He said the cocktail hour, the dinner and the meetings Monday and Tuesday struck all the right chords.

“These are the cream of the crop in the site selector world,” he said. “For them to see firsthand not only what the Hub will be, but all of our projects, was amazing.

“You have to realize, some of the largest companies in the world are going to reach out to these very individuals and say, ‘Wat’s hot? Where should I be looking? I want to expand and find a research hub, where should I go?’

“And for them to have seen what we have coming out of the ground right now is incredible.”

They also saw the group committed to the project.

This was a united front. One that impressed, Lozano said.

“What they found most amazing — and what they don’t see in other states — is the collaboration,” he said. “To be able to have two health care systems, which technically compete, be able to work together on research with two huge universities and the private sector — and be able to come together before the building is even built — fascinated them.”

On Tuesday, the group spent much of the day touring Newark and other parts of North Jersey. They wanted to get a sense of all the state has to offer.

They got a sense of the commitment the state’s leaders have for New Jersey.

Cahill showed them that Monday night.

“The mayor actually went as far as to say, ‘If New Brunswick is not the right place for you, give me a call. I know all the other mayors. I’ll be whatever help I can be,’” Paladino said.

“The fact that we’re all willing to work as a team for New Jersey is something they said they just don’t see everywhere.”

Diversity & Inclusion
ROI-NJ Staff -
December 2, 2021
The campus of New Jersey Institute of Technology in Newark has been selected as host of the third National Black Political Convention next spring...