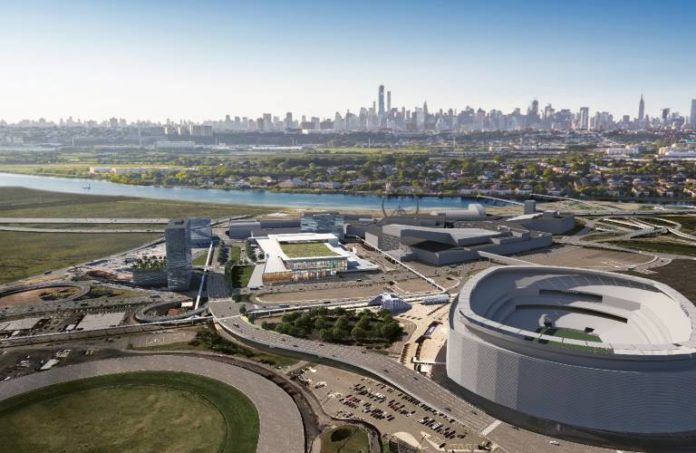 Let’s start with the money question. Because that’s always the first query when it comes to mega economic development projects. Building the proposed 460,000-square-foot multipurpose convention and exhibition center/ballroom/amateur sports mecca that would transform the Meadowlands would cost “in the B’s.”

Not $2 billion. But not $1 billion. The cost, those involved said, can’t be determined until it’s determined how much is involved, such as road and infrastructure improvements.

The potential return? That’s in the B’s, too.

So said the three panelists Tuesday morning at a Meadowlands 2040 Foundation event.

Hunden, a longtime leader in the space whose team did the study (see the full story on the project here), said the potential of the facility is unmatched.

“I’ve never did a study where every box had a green check — there are no red X’s,” he said.

“I don’t cheerlead. We tell the truth. And the truth is, the opportunity is there, and the impact will be massive. I think it’s going to be a game-changer for New Jersey’s reputation.”

To be clear, the project is just a study. Phase 2 — which organizers said begins Tuesday — is about assessing costs and getting support to pay those costs.

This also is clear. While the dream of a convention center at the Meadowlands goes back to the opening of Giants Stadium in the 1970s, doing so now is time-sensitive. The project, which could take 3-5 years to finish, needs to be started soon if it is to be completed before the 2026 World Cup comes to the U.S.

Here are a dozen reasons the speakers listed that they said makes the project a no-brainer:

There you have it: A dozen reasons in favor of the facility as an economic engine for the region.

We certainly have not seen the last of devastating storms. And everyone fears this pandemic is just the first, too.

Large convention and exhibition halls proved to be an invaluable asset to communities across the county and around the world. The nation’s most densely populated area surely would like to have such a site in place for years to come.

Goal in sight: At HBSE, Gould feels that how you hire...

In Plainfield, unexpected aid is leading to unprecedented push in economic...