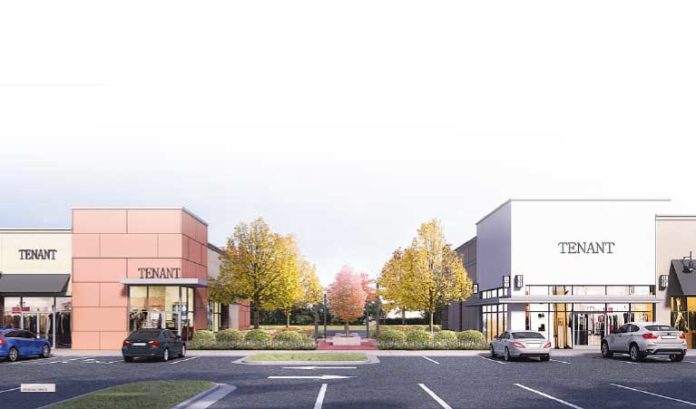 Morris Township Mayor Jeff Grayzel said having retail outlets with too many drive-thrus makes your town just a drive-through experience.

So, when developers came to him with the Morris Marketplace, the retail development going up next to Mennen Arena, Grayzel insisted on something different: He wanted a destination.

Grayzel wanted something new and unique, so he worked with developer Robert Indig, managing partner for Lakewood’s Devimy Equities, and Accurate Builders and Developers.

The 20-acre site, located in front of a 30-acre area that includes 190 townhomes, will be transformed into a town center that will include pavilions, pocket parks and other family-friendly features.

Gone are (most of) the drive-thrus for adults. In are numerous park and water areas for kids — and plenty of places to sit and eat. Or even do yoga.

“We didn’t want to add another mall just for the mall’s sake or for money’s sake,” Grayzel said. “We wanted a development that was additive; something that would truly add value to our community.

“Building another strip center — and one with three separate drive-thrus — is just not adding value. That would have just added to the congestion, which is already a problem. People would have only stopped there and gone in and out while driving through our town on the way home.”

Grayzel simply wants people to stop — actually get out of their cars — and to want to stick around.

“We want people to stop and stay at the mall; to congregate,” he said. “That’s where adding these outdoor plazas and pocket parks come in. These also help the retailers — especially those that appeal to kids — and their stores will be able to face the parks.”

Grayzel said this is a step toward bringing Morris Township — an unusual-shaped municipality that is a doughnut around Morristown — a downtown of its own.  He said the easiest part has been working with Indig. 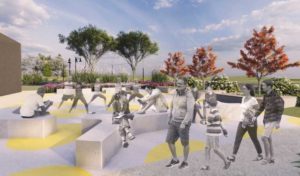 “What’s making this project a success already is that he has been a great partner — a developer who is willing to work with us to make sure our vision comes to be,” Grayzel said.

Indig said he didn’t need to be convinced. He said he’s excited by the concept.

“We want Morris Marketplace to be more than just an everyday place for an everyday shopper,” he said. “It will be a place where people can hang out on weekends, or sit and have coffee, or eat their lunch outside. There will be plenty of seating areas.

“A strip center as a destination is not something you see around New Jersey. We’d be the first to have it in this area.”

The strip mall will be anchored by a Lidl grocery and include Panda Express, Wells Fargo, Habit Burger Grill, Mattress Warehouse, AT&T, uBreakiFix, &Pizza, Red Wing Shoes, Tropical Smoothie, Popeye’s and Starbucks, among many others.

The sitework is done. The foundations are down. One building is being framed.

Indig said he hopes to deliver the facility next summer — and that early reviews are good. He said restaurant tenants such as Jersey Mike’s Subs are pleased with the design. 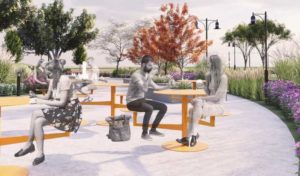 “Jersey Mike’s, for example, doesn’t have outdoor seating or a drive-thru; this will be set up so their customers can sit and enjoy themselves over lunch,” Indig said. “And these outdoor areas will be able to serve our higher-end restaurant tenants, as well. They will have outdoor dining areas.”

Indig said the plaza will include two water features (bubblers for splashing around) for children.

“The kids will love it, and will want to come back, and, when that happens, they’ll bring their moms and dads and it’ll be a win-win for everyone, including the mall tenants,” Indig said.

Another tenant, Orange Theory Fitness, plans to use outdoor areas to conduct fitness classes and to set up a yoga studio, weather permitting, Indig said.

Grayzel said he envisions the marketplace to be a model for the future. That’s why it will have 16 electric vehicle charging stations, which appeals to the state’s demand to serve its growing number of EV drivers.

“We’re the first town in the state to write an ordinance to require them at any new commercial development,” he said. “We see them as a potential attraction to draw more people to the mall, because we’re reasonably close to the highway. People need a place to charge their cars and grab a meal.” 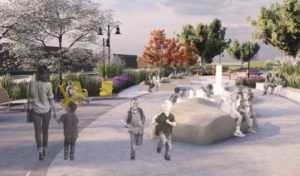 Nicole Pittaluga, co-founder of the Museum of Imagination and Innovation in Basking Ridge, consulted on the pocket-park concept installations.

Pittaluga said there will be nine installments, such as life-sized musical instruments, a large slate wall that is like a chalkboard where kids can draw and water paint with their fingers by using the water features in the park.

There’s a thoughtful hopscotch board set up, where kids see commands on decals and have to do the opposite, which keeps them on their toes. There are story spinners, where kids can play with their parents and arrange the icons to tell a story, she said.

“Adding playful learning experiences can really enhance what they already had planned,” she said.

Pittaluga said the marketplace will give the town more of a downtown feel and then some.

“It fits with the placemaking trend in development,” she said.

In 2019, CIT Group inked a 15-year lease for 200,000 square feet of space and relocated its corporate operations from Livingston to the building in late 2020.

Earlier this year, Onyx Equities completed its $50 million capital improvement plan at 340 Mount Kemble Ave., a Class A+ office property, and is calling it the healthiest building in the state.

And retailer Restoration Hardware was given approval to renovate the Abbey mansion on Madison Avenue into one of its home design stores.

Diversity & Inclusion
ROI-NJ Staff -
December 2, 2021
The campus of New Jersey Institute of Technology in Newark has been selected as host of the third National Black Political Convention next spring...