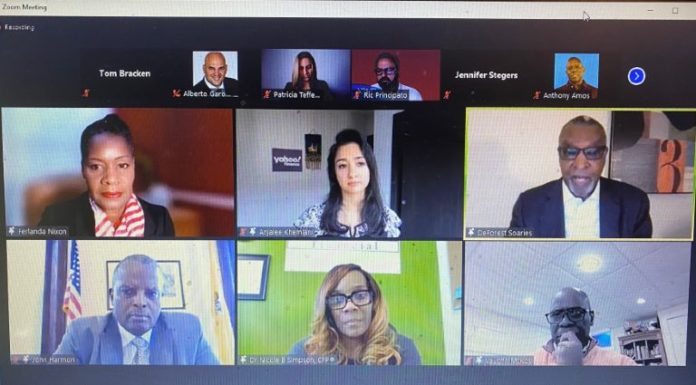 The Rev. DeForest “Buster” Soaries — as he has throughout a career of leadership in the public, private and faith-based sectors of the state — summed up the significance of diversity in the boardroom in a thought-provoking way.

The boardroom is the place where Blacks can have the most significant impact. Far better, he said, than what is the conventional wisdom around political office.

The economic and bottom-line benefits of having a diverse board have been well established — and certainly were discussed. But Soaries and John Harmon, the head of the African American Chamber, took the concept to a deeper level.

Board diversity is just one issue. Workforce diversity, supplier diversity, access to capital and corporate citizenship — all goals set forth by the two chambers — will help improve society, not just the bottom line, Harmon said.

It starts, however, on the corporate front.

“Each pillar that we have articulated as goals are significantly equally as important as board representation,” Harmon said. “Because, when you get the right person on the board, that person is going to drive those pillars or that agenda within the context of the mission of the organization that they’re a part of.”

Harmon said the impact of doing this will change communities, starting with the African American community.

Harmon is honest about the need.

“Black people in New Jersey, if you put this in the context of a balance sheet, were on the liabilities side,” he said. “We have the highest poverty, highest unemployment, low median income. Our net worth is $5,900 compared to $315,000 for whites. Homeownership is probably between 35 and 37%.”

Changing this helps everyone, Harmon said.

“Each of those areas have to appreciably increase in order to improve the overall competitiveness of the state,” he said.

The far-reaching impact of diversity initiatives have been seen for generations. Soaries traces it back to the Civil Rights era.

“When you see the methodology of becoming inclusive of Black people, that methodology is transferable to women and to Hispanics and Asians,” he said. “That’s why so many different groups were able to benefit from the civil rights movement.

“The Civil Rights movement was aimed at ending discrimination against Black people, but it opened up opportunities, it leveled the playing field, it created a more just and fair society for all groups that were underserved and left out.”

And, while advances in that era often came from social movements, Soaries said you can extrapolate the potential benefits of business involvement.

“If Rosa Parks had been on the front of the bus company in Montgomery, Alabama, the bus boycott would have lasted about two days, because she could have been in the room and at the table being able to influence policy,” Soaries said. “Instead, it took over a year to convince the bus company that it was in their best interest — and in the interest of the community — to let Blacks ride on the bus wherever they wanted to.”

Harmon said those in the Civil Rights era succeeded because they drew a line.

“Black people, at that time, put down a marker, saying, ‘We’re not going to go along and get disrespected,’” he said. “’We are contributing to this economy and there should be some reciprocity.’”

How supply chain diversity can strengthen your business

The same can hold true today, Harmon said. The Black community needs to take advantage of its economic clout, noting the $1.4 trillion that the community spends annually, he said.

Harmon applauded corporations for improving their diversity numbers on corporate boards, saying approximately one in three board appointments since George Floyd’s death have been people of color. He said now it’s up to the community to recognize the power this brings.

“I think it’s incumbent upon us, particularly Black people, to get more in the economic ecosystem,” he said. “Sometimes, we get so enamored about politicians and selfies (that we) just want to hang on to their every word. But, at the end of the day, being in the private sector and talking about the economics and the reciprocity, that’s what’s going to transform people’s lives — yes, in partnership with those who make policy.

“I think that’s where we’re falling short, as Black people. We’re very educated, very talented, but we’re still minoring in the major and majoring in the minor. How we pivot could be make a very big difference in how we coexist in society.”