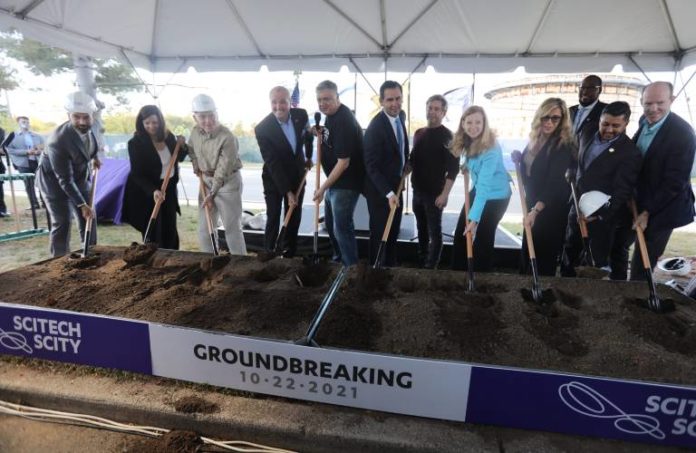 Paul Hoffman is more than just the CEO of the Liberty Science Center and one of the foremost minds on all things STEM in the country.

He’s a fabulous storyteller, too.

Anyone who has ever heard Hoffman, in his trademark T-shirt and sneakers, wow a crowd from behind a lectern is nodding their head.

Friday, in the LSC parking lot, and on the edge of the lot that will become the transformative SciTech Scity, Hoffman put the potential of the entity in full perspective with a simple tale.

It was a “Jetsons”-like dream then, but a reality today.

“We used a form of that everyday during the pandemic,” he said. “That changed the world.”

In that one quick quip, Hoffman summed up the essence of the $300 million project.

“We want a place where you can come and see the future,” Hoffman said.

Hoffman was spinning the tale that Gov. Phil Murphy has been touting since he was candidate Murphy.

The goal, Murphy always has said, is to build an innovative economy in New Jersey — something the state obviously has a long history of doing.

And, while the state and the governor have had a number of technology wins this fall — think HAX in Newark and Fiserv in Berkeley Heights — SciTech Scity may top them all. The potential is that great.

“Let’s be quite clear, we’re not breaking ground on just any new buildings,” he said. “Today, when we turn over our shovels, we will be breaking ground on an entirely new and exciting world of possibilities in education and innovation, and in partnership and collaboration. And not just for Jersey City, or Liberty Science Center, but for our entire state.

“Everything we will need to make New Jersey a global leader in innovation and technology from education onward will be right here on this campus.”

“I’ve had the honor to break ground on new high schools and inaugurate new programs where students will be learning at the leading edge of technology and innovation,” he said. “I’ve joined ribbon-cuttings at research & development labs and business incubators where ideas move from a drafting table to reality to commercialization. And I have seen the look of discovery on the face of visitors, whether they be children or adults, as they immerse themselves in all that Liberty Science Center has to offer.

“Today we’re taking a huge step forward, creating a single campus so each of these things can and will happen together.”

Mayor Steve Fulop and the city council, which donated the land for SciTech Scity, had plenty of options for the space: Every developer in the state wanted a chance to turn the land that features dynamic views of the Statute of Liberty and the New York City skyline into the latest multifamily destination.

And they would have paid top dollar.

Fulop wanted more than money. That’s what he said when sat down with Hoffman and famed developer David Barry, who is on the Liberty Science Center board.

“We said: ‘We’ll give it to you. We just want a big, ambitious plan,’” he said. “We wanted to make Jersey City a destination place that would attract people — regardless of where you are from beyond this region — to come here, knowing about what was happening here.”

They will come here to learn and create and innovate, all the speakers said.

And, while it’s cliché to say the next generation will care for those in attendance today, Liberty Science Center board member Laura Overdeck said it’s a necessity, not a novelty.

Overdeck, whose family foundation has been a major funder of the LSC and SciTech Scity, said the country cannot take education and innovation for granted.

That’s why she is most excited about the high school. Not just for the amazing students it will attract, but the message it will send at a time when only approximately half of adults can read beyond the sixth-grade level and do the mathematical computations needed to live in society.

It’s gotten so bad, she said, that close enough is becoming good enough.

“Nature will not bend,” she said. “Science and math are the pursuit of truth.”

This is the greatest impact that SciTech Scity can have, Overdeck said.

“This campus and this high school with this incubator are exactly the thing to turn this around to attract talent and capital to New Jersey,” she said.

To create and innovate products the next generation will look back upon — giving today’s students the same “Oh, wow” moment that Hoffman got at the 1964 World’s Fair.