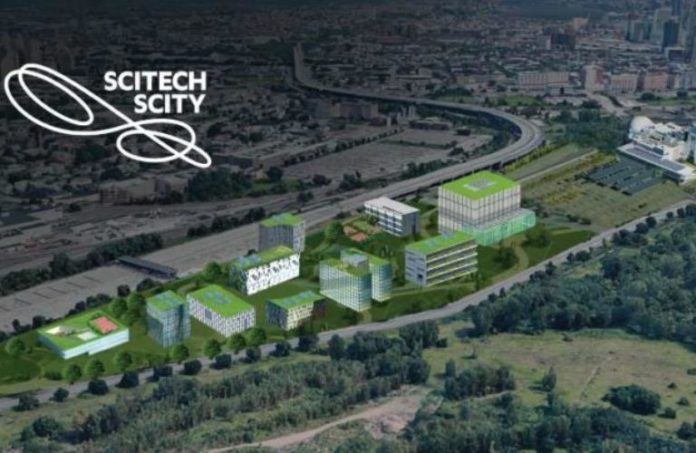 SciTech Scity aims to bring together scientists, community leaders, teachers, students and other thinkers and doers who share the feelings of renowned computer scientist Alan Kay: “The best way to predict the future is to invent it.”

“Our goal is to convene experts from multiple disciplines and harness science and technology to solve social problems and turn leading-edge ideas into a reality that makes the world a radically better place.”

The site also will include a magnet school for young minds.

“We want to create the best science high school in the United States, for students in Hudson County,” Hoffman said.

Phase I of SciTech Scity, which is scheduled to open in late 2023 and 2024, will have $300 million in new construction on 12.5 acres of land donated by the city of Jersey City. It will include the following:

Subsequent phases of SciTech Scity may include expanded incubation spaces, wet labs, additional schools, a satellite campus of a major university, or other facilities to drive STEM innovation and job creation.

The existing Liberty Science Center and the new SciTech Scity construction will span 30 acres and be called the Frank J. Guarini Innovation Campus, named for the former member of the U.S. House of Representatives, New Jersey state senator, real estate developer and philanthropist from Jersey City who made a $10 million gift to LSC toward the creation of Edge Works.

That gift, the largest received to date by the center, was matched 50 cents on the dollar by a $5 million pledge from LSC board co-Chair David Barry.

Four companies so far — EY, Verizon, Bank of America and Horizon Blue Cross Blue Shield of New Jersey — have signed on as Corporate Founding Sponsors and made seven-figure contributions. All in all, $42 million has been raised for Edge Works, with the remaining funding expected to come from financing and government sources.

An additional $5 million in private donations was raised to jump-start the creation of Liberty Science Center High School, with Laura and John Overdeck providing a lead gift that was subsequently matched by contributions from the Paul and Phyllis Fireman Charitable Foundation, Josh and Judy Weston, Joe and Millie Williams, Public Service Enterprise Group, Norm Worthington and others.

Hudson County has pledged to float bonds to finance the school’s construction, and both Jersey City and Hudson County have pledged to provide operational support for Liberty Science Center High School for 30 years.

Fulop, who has pushed for the project for years, was thrilled the day is here.

“As we break ground on SciTech Scity, we are entering a new era for Jersey City,” he said. “One that fosters collaborative innovation on a level that has never been done before to create a coveted science-based public education for our local youth as part of an all-encompassing progressive campus where entrepreneurs and scientists can thrive.

“We’re in the midst of an incredible transformation as we further establish Jersey City as the sought-after destination for STEM education and innovation, attracting world-class companies, jobs, investment and countless other opportunities. I’m incredibly proud to be a part of this groundbreaking moment.”