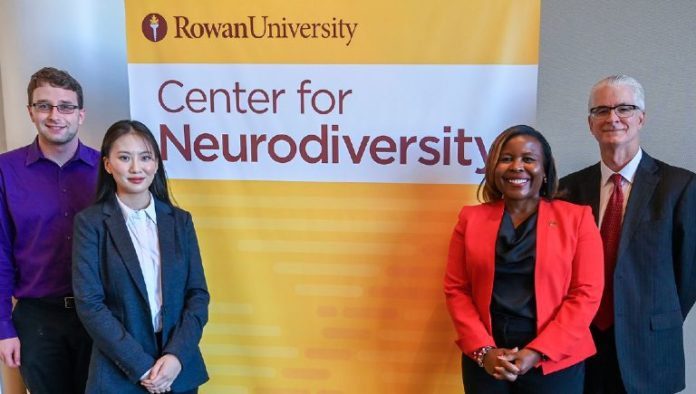 Rowan University established the first Center for Neurodiversity in New Jersey — an expansion of services for neurodiverse students that university officials said shows the commitment Rowan has to greater access and inclusion on its campus in Glassboro.

Rowan President Ali Houshmand has long made neurodiversity inclusion a priority. In 2019, Rowan became the first college or university in New Jersey to launch a full division dedicated to diversity, equity and inclusion.

“This is about human beings trying to be supportive of other human beings,” he said during a brief ceremony last week to celebrate the opening of the new center.

“For me, the issue is not just working with neurodiverse students while they are students, because that we can do. For me, the bigger issue is what happens afterwards, when they graduate. I want to make sure they can function, run a business, create wealth and have a happy life.”

Rowan’s Center for Neurodiversity, which has a temporary home in Laurel Hall, will expand support and academic services to a wide range of students — often high-functioning, high-achieving individuals whose brains operate normally, though somewhat differently than what is considered “neurotypical.”

Often, neurodiverse people have one or more condition, such as attention-deficit/hyperactivity disorder, or ADHD; obsessive-compulsive disorder; dyslexia; or autism spectrum disorder. These disorders make them think and act in ways not considered neurotypical. Experts say such conditions are simply differences in how brains work, not disabilities, and many very high achieving individuals have them.

Monika Williams Shealey, senior vice president for Rowan’s Division of Diversity, Equity & Inclusion, which operates the center along with the Division of Academic Affairs, said the announcement capped a period of long and detailed planning by faculty, staff, students and community members.

“President Houshmand told me countless times over the past two years that we need to address not only the academic needs, but the personal, social and emotional needs of our students, particularly our neurodivergent students,” Shealey said. “The center will be a hub for the neurodiverse community and connect students, faculty and staff to resources and support.”

Following the program, Dr. Temple Grandin, a world-renowned animal scientist, autism activist and professor, delivered a virtual and interactive keynote address. On the autism spectrum herself, Grandin was the subject of a multiple Emmy Award-winning 2010 film. She reiterated that neurodiverse people think, learn and sometimes act differently than neurotypical people, but often have talents and abilities that enable them to succeed in ways that are truly exceptional.

A prolific author on animal behavior, Grandin is known globally for innovations in humane livestock handling, and she encouraged students to utilize their own gifts to light their way.

“Make yourself really good at something people want and that they will appreciate,” she said.