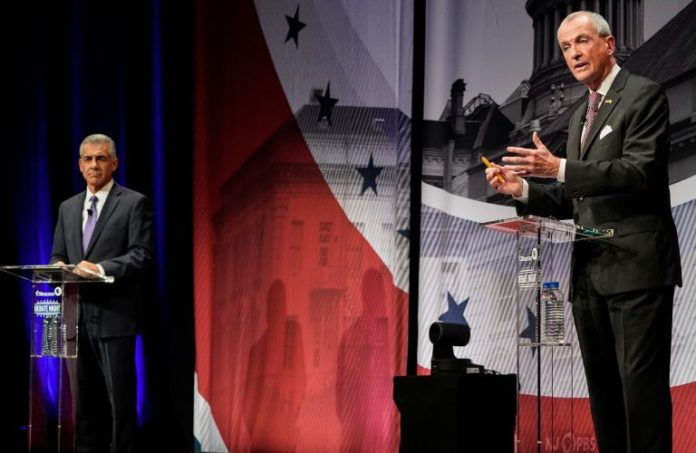 A new Monmouth University Poll released Wednesday shows Gov. Phil Murphy with an 11-point lead over his Republican challenger, Jack Ciattarelli, although the margin has narrowed slightly, 50%-39%. In September, the incumbent Democratic governor held a 13-point lead, 51% to 38%, and in August he held a 16-point one, 52% to 36%.

According to the final poll before the election, top of mind for voters is taxes, an area where Ciattarelli, a former accountant, has a decided advantage. The poll did find Murphy as being more trusted across a wider range of policy areas.

The poll also found that the Garden State opinion of President Joe Biden has dropped into negative territory: 43% approve and 49% disapprove. His prior ratings here showed him with majority approval levels (51% in August and 55% in May).

“We’ve had a couple of debates and a slew of advertising since the last Monmouth poll. Ciattarelli has chipped away at Murphy’s lead, but hasn’t delivered the knockout he needs,” said Patrick Murray, director of the independent Monmouth University Polling Institute.

Murphy enjoys a large 63% to 26% margin among voters who have already cast their ballots or who intend to vote early, but Ciattarelli had a lead, depending on the turnout scenario, of between 5 to 12 points among Election Day voters.

“Even if we figure in potential error margins for these partisan group results, Ciattarelli cannot win this race based on registered Republicans and unaffiliated voters alone. That outcome would require a pretty sizable collapse of Democratic turnout,” said Murray.

From a list of seven different policy areas asked about in the poll, “taxes” emerges, nominally, as the top issue (27%); followed by jobs and the economy (20%), schools and education (16%) and the pandemic (15%). The remaining issues register in the single digits: i.e., crime (7%), abortion (5%) and transportation infrastructure (4%).

The Monmouth University Poll was conducted by phone from Oct. 21-25, with 1,000 New Jersey registered voters. The question results in this release have a margin of error of +/-3.1 percentage points.

$25B wind energy company from Germany to open office in Jersey...