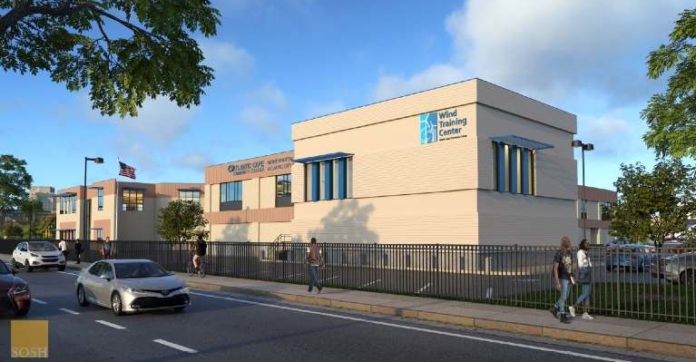 “Offshore wind on the Atlantic Coast holds enormous potential to spur economic development and diversification in our region, which is needed now more than ever as we begin to recover from the pandemic,” Atlantic Cape President Barbara Gaba said. “We are excited to be able to play a key role in this clean energy transformation by providing the necessary education and workforce training programming to support this burgeoning industry.”

Through the New Jersey Offshore Wind Safety Training Challenge grant, awarded to the college in July and administered by the Office of the Secretary of Higher Education with the support of the New Jersey Economic Development Authority, the college will establish an industry-recognized Global Wind Organization safety training program and facility to prepare New Jersey workers for jobs in the state’s growing offshore wind industry, as well as establish a Sea Survival module at Gardner’s Basin.

“The Wind Training Center at Atlantic Cape will be a tremendous asset to our state’s clean energy infrastructure. It is preparing the Atlantic City region’s workforce for good-paying jobs in offshore wind while diversifying the city’s economy,” said Lt. Gov. Sheila Oliver, who serves as commissioner of the Department of Community Affairs. “By investing in the Blue Economy, the administration is getting closer to reaching our clean energy goal of generating 7.5 gigawatts of offshore wind power by 2035.”

The college’s GWO-certified partners, Arcon Training Center, AIS Training and 3t Energy Group, have been working with Atlantic Cape officials over the last several months to bring this project to fruition.

The doors of the training center are scheduled for a fall 2022 opening.

Currently, Ørsted is developing two offshore wind projects off the coast of New Jersey with the capacity to generate more than 2,200 megawatts of clean energy. Ørsted’s first project, Ocean Wind 1, received approval from the New Jersey Board of Public Utilities in 2019, and the second Ocean Wind 2, received BPU approval in June 2021.

There have been three offshore wind projects approved to date from the BPU, representing half of the state’s goal for clean energy. These projects will power 1.6 million homes, inject $4.7 billion into the state’s economy and create thousands of jobs, said Jim Ferris, bureau chief of new technology, Clean Energy Division, BPU.