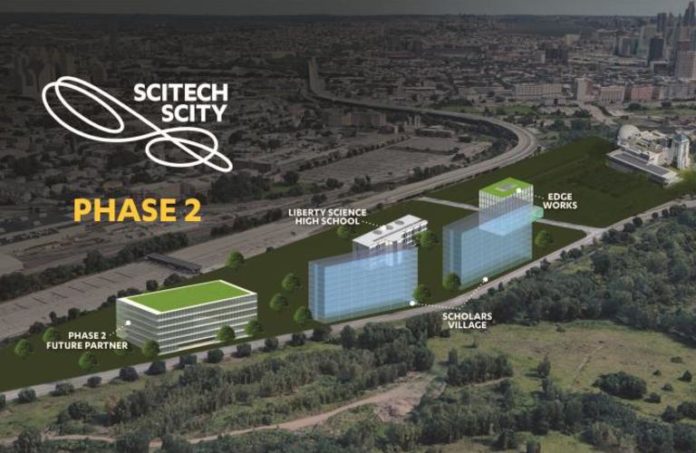 There are many STEM high schools across the state and the country that are providing cutting-edge educational opportunities to the next generation of scientists and researchers. Most have top instructors, and some have state-of-the-art lab space for students to learn.

None will be able to match what will be available at the still-to-be-formally-named Liberty Science Center High School.

Scheduled to open in 2024, it will be housed next to the Edgeworks incubator in SciTech Scity on the grounds of Liberty Science Center. That will make all difference, LSC CEO Paul Hoffman said.

“All the students that are there will be able to do meaningful work experiences and mentorships at the companies based in Edgeworks,” Hoffman said. “That’s going to distinguish it from schools anywhere else.

“They also have the resources of Liberty Science Center. If you’re a kid interested in astrophysics, what could be a better place to be able to show your work and look at images than on the largest planetarium in the Western Hemisphere?”

The state has had a lot of high-tech success in 2021 — including HAX (which will fund 100 startups in Newark), Fiserv (which will bring 3,000 fintech jobs to Berkeley Heights), BeiGene (which will open a research & development campus in Hopewell) and WebMd (which is moving 600 jobs to Newark).

But, all of those entities involve bringing the latest in innovation and technology — and those creating it — to New Jersey.

This high school will aim to teach those who will create the next-generation advances.

Liberty Science Center Trustee Laura Overdeck, one of the key funders of SciTech Scity, has been a force behind the creation of the school, Hoffman said.

“What’s so fabulous about the high school is that we’re sending a very strong signal, but also taking action to raise the next generation to understand that we’re depending on them,” she said.

The school will help New Jersey — home of Thomas Edison and Albert Einstein and Bell Labs — reclaim its place in the innovation landscape, Overdeck said.

“This campus, putting this high school with this incubator, is just exactly the thing to turn this around to attract talent and capital to New Jersey,” she said.

“Our students at the sixth-, seventh- and eighth-grade level had the opportunity to shadow scientists throughout the day,” she said. “In fact, we built our curriculum around the units based in the Liberty Science Center.”

For LSC, which already hosts more than 200,000 students a year, the new school will be an opportunity to elevate the connection, Hoffman said.

“This will be a public magnet school for the county to draw the most science-interested students,” Hoffman said. “Not necessarily the ones that test the best, but the ones that are passionate about science.”

Hoffman said it’s another dream come true for him.

“I never thought in my life that I’d be part of a process to create a new school,” he said.

Hoffman said there is such a natural synergy between a high school and the startup components — and that he hopes to one day extend that relationship to lower levels.

“Aspirationally, we really are going to aim to make this the best science school in the United States,” he said.

“We really hope this project is going to rock not just Jersey City, but, if we do it right, rock the world.”