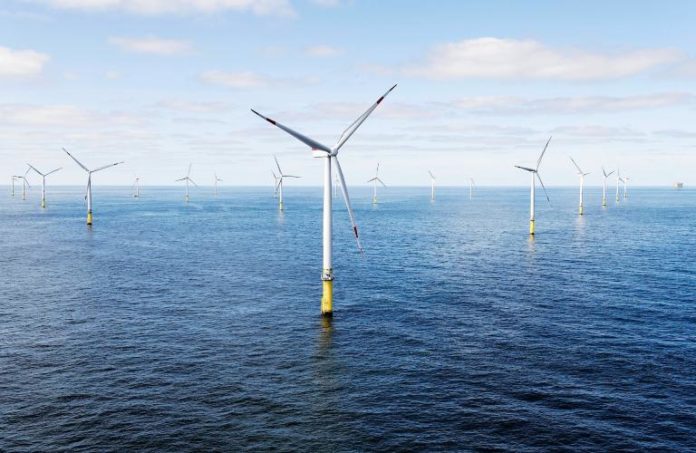 If there’s one thing Rutgers University professor Kevin Lyons is sure of, it’s this: People might have an image in their heads of the spinning blades of offshore wind turbines …

Those aren’t drawn to scale.

From end to end, just one of these turbines’ blades can match or even surpass the size of a football field. Pieced together, these megastructures are far bigger than you might expect — giving, in the view of Lyons, their local manufacturing and assembly an outsized importance in this new industry’s success.

As the expert in the Supply Chain Management Department at Rutgers Business School describes it, their transport wouldn’t be a breeze. Just one massive blade may have to be loaded onto a series of heavy-duty trucks. Maneuvering those blade components through towns on a path from the Midwest to the East Coast could take a week or more. Shipping from Europe wouldn’t be any quicker.

Now, Lyons said, multiply that by the thousands of turbine blades needed for an effective offshore wind farm.

Lyons, who was also named to Gov. Phil Murphy’s New Jersey Council on the Green Economy, is a supply chain person. That means he’s interested in taking the big-picture renewable energy ideas and putting them under a logistics microscope: How do you move parts around? Where are supplies coming from? Who manufactured those parts?

He’s hoping a lot of that will have Garden State answers.

“Not having a strong local sourcing strategy, to me, at least, is not very wise,” he said. “Shipping all these needed components from here, there and everywhere would take forever. That’s why something like what New Jersey is doing with its Salem County site is critically important.”

Those components are used as foundations for offshore wind structures, as well as turbines and blades.

As Madeline Urbish, Ørsted‘s head of government affairs and policy for New Jersey, puts it, it’s also part of the foundation for more localization of the offshore wind farm supply chain.

“I think New Jersey in general has made very strategic investments, and that’s what’s really going to attract the supply chain,” she said. “A big part of that is that the regulatory certainty is greater than we’ve experienced in other markets.”

Besides the international companies setting up shop locally, Lyons sees potential for existing New Jersey manufacturers to find a place creating components that will soon be needed en masse.

“In New Jersey, we have such a robust manufacturing sector — with about 10,000 manufacturers in the state — and that’s not highlighted maybe as much as it should be,” he said. “And, while they’re not all involved in offshore wind components, some could choose, as demand surges for that particular area, to make a transition to support the state’s renewable energy push. For some, it wouldn’t be too heavy a lift.”

The major sign those manufacturers capable of capturing business in this emerging market have looked for, Lyons said, is that the offshore projects are on solid ground. They don’t want to upend their current business model for a state-driven initiative that’s going to have starts and stops, he said.

That solidness is plain to see already, he believes. And Lyons doesn’t expect a leadership shakeup, whether in the governor’s seat or anywhere else, would change that.

“I could see some other priorities being implemented, which is the prerogative of whoever is in the State House, but, once an industry is invested in, bonding is approved and budgeting priorities are set in a particular direction, it’s hard to reverse,” he said. “If someone came in and said, ‘Everything we’ve talked about before is null and void,’ it would be interesting — and anything in today’s climate is possible. But the momentum on this one, at this point, is real.”

There are other current trends upping the importance of a more localized supply chain.

Lyons pointed to the already-existing issues in the global supply chain that could further exacerbate a slower industry buildout. Namely, there are problems with the supply of circuit boards and transistors, which are utilized in building pretty much everything from cars to appliances. They also help form the motorized elements of wind turbines.

Another trend that Lyons finds as a compelling reason to move the supply chain closer to home is that other coastal states are building out offshore wind projects. Having a manufacturing base in New Jersey means the state can be in the center of that nationwide endeavor.

“If it all pans out, we’ll be able to participate in not just the execution of our own offshore wind program, but those of neighboring states,” he said. “So, it’s in our best interest to push this — and it’s largely what we anticipate happening. So, we’re very excited about it.”