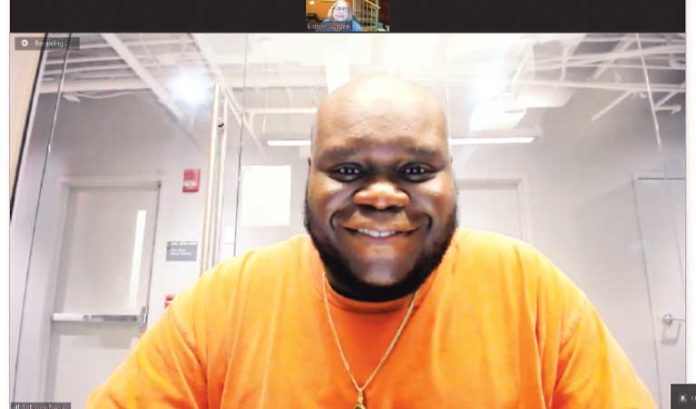 Serial entrepreneur and Newark startup activist Anthony Frasier has hitched his wagon to the skyrocketing podcasting industry. His podcast network is producing cutting-edge work that connects him to his roots and his community.

Frasier knows something about community. Actually, it’s been his life’s work. He began by creating an online community for Black gamers to discuss computer gaming; next, he founded the Brick City Tech Meetup, at a time when there really was no tech community in Newark; and then he organized big tech events. Now, as founder and CEO of ABF Creative, based in Newark, Frasier is reaching out to the larger multicultural community through voice.

He has found his niche in podcasting. ABF Creative won a Webby in the “Diversity and Inclusion” category in 2021 for producing a podcast series called “African Folktales.” A few years before, Frasier had been an entrepreneur in residence at Newark Venture Partners; and, during the pandemic, ABF Creative joined the NVP Labs accelerator.

The company recently graduated from the fifth cohort of the Multicultural Innovation Lab at Morgan Stanley. That startup accelerator promotes financial inclusion and provides access to capital for early-stage technology and tech-enabled companies led by women and multicultural entrepreneurs. It was the first accelerator accepted into New Jersey Economic Development Authority’s NJ Accelerate program in late 2020.

Success has come to Frasier as the podcasting industry has skyrocketed. The total market size in the U.S., as calculated by Grand View Research, based in San Francisco, is projected to be more than $14 billion in 2021. ABF Creative was an early entrant into the process.

“We happened to plant our flag a lot earlier than a lot of people, and so we’re starting to see the benefits,” Frasier told NJTechWeekly.com.

Using data and AI in podcasting

He discussed the company’s data-driven approach to podcasting.

Said Frasier: “We leverage machine learning and AI (artificial intelligence) to use predictive analysis. We basically test voices, sounds and music against the potential audience before we release the podcast. And, so, that gives us an edge, especially when it comes to making content specifically for people of color. I think it’s a unique approach. We are testing this approach out and, so far, so good. Our first podcast that we used this technology with was ‘African Folktales,’ which is the podcast for which we just won the Webby award.”

“(Being successful) really came from those relationships that we built for years doing events and doing a lot of local tech community stuff. I was able to leverage a lot of that goodwill that built up to get our first two customers. And, if we didn’t have those first two customers, I don’t think we would be where we are today.”
— Anthony Frasier, CEO, ABF Creative

“During COVID, kids were in the house,” he said. “We were thinking, ‘What could be something unique and interesting we can do for kids who are at home?’ So, we decided to use African folktales. For one thing, there’s an abundance of them. Then, we decided to create this world around them, with this fictional teacher called ‘Ms. JoJo,’ who’s like the black Ms. Frizzle, if you ever watched ‘The Magic School Bus.’”

“And, so, we put it out, and the reception was amazing. People fell in love with it. Parents listened to it with their children. We get emails all the time. It’s part of people’s nightly rituals, and we’re just fascinated by the result. That just shows that machine learning and what we’re doing is the future of content creation.”

The Veritonic technology lets ABF Creative know what works better for audience members, he said. For example, you want your podcast to have a memorable voice. Should you use the voice of an older woman or a younger woman, or an older male or a younger man?

“We have to test those different assumptions out and look at the score that comes back,” Frasier said. “From that, we’re able to determine which way we want to go.”

However, there’s more to it than just the score, Frasier explained.

“For example, maybe this voice scores high in recall value, but (it scores) low in energy,” he said. “So, you have to play a game of tug of war with the results that come back, but, once you find the combination that you want, it’s easier to choose the voice you’ll use.”

He added that ABF Creative is hanging its hat on data-driven decisions when it comes to content creation.

“We feel like this is revolutionizing the way people produce podcasts,” he said. “What can be a bigger waste of time and money than to go off of a hunch, on what you think would work, spending thousands, if not hundreds of thousands, of dollars to produce something — and then you put it out and nobody likes it? All we want to do is be a little bit smarter, and we want to make content creation smarter.”

Frasier believes that, by using machine learning and AI, ABF Creative is doing good for the listening community; and the company is backing this belief up through its own polls and research. It is also using AI with its corporate clients.

“We work with a lot of larger brands, like, for instance, Ben & Jerry’s ice cream,” he said. “We are officially doing the Ben & Jerry’s podcast. We’re proud to be able to test these AI and machine-learning approaches out with them and others.”

It’s all about community

Going back to his beginnings in podcasting, Frasier noted that, when he started out, he had nothing. He didn’t even have production equipment or content, he only knew that he wanted to tell stories. But Lyneir Richardson, executive director of the  Center for Urban Entrepreneurship & Economic Development at Rutgers Business School, gave him a chance when he pitched a podcast that would feature interviews with venture capitalists. Frasier admits he didn’t know much about what he was doing, but the podcast, called “VC Cheat Sheet,” turned out well.

“It really put the name of the Center for Urban Entrepreneurship out there,” and it was a very successful podcast for Rutgers, he said.

After that, he wound up getting some professional equipment and pitching Jeff Scott, then New Jersey Devils and Prudential Center vice president of community investment and grassroots, also a Newark-based executive.

“It turned out great,” he said. “We recorded the podcast live at an event at the Grammy Museum at the Prudential Center.”

For Frasier, everything comes back to community.

“(Being successful) really came from those relationships that we built for years doing events and doing a lot of local tech community stuff,” he said. “I was able to leverage a lot of that goodwill that built up to get our first two customers. And, if we didn’t have those first two customers, I don’t think we would be where we are today.”