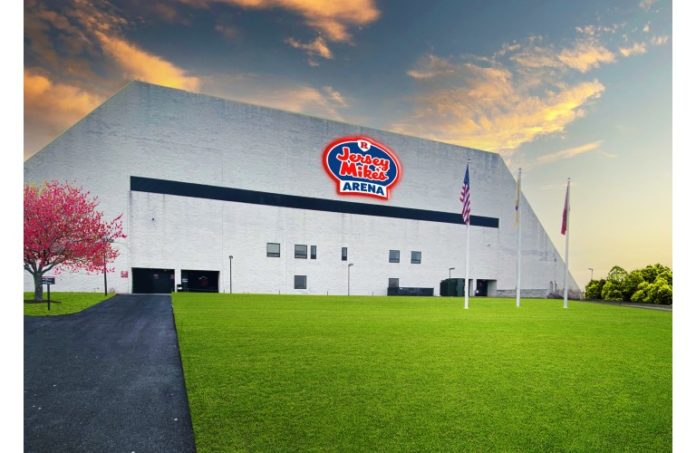 The partnership was first reported in October.

“Jersey Mike’s is the perfect partner for Rutgers Athletics,” said Pat Hobbs, Rutgers director of athletics. “Our New Jersey brand extends beyond our borders; it is a state of mind that speaks to our core values of grit and the pursuit of excellence. Jersey Mike’s is an organization also engaged in the relentless pursuit of excellence, so what better partner for the State University of New Jersey?”

As part of the agreement, Jersey Mike’s will enjoy significant brand exposure through signage in and around the arena, including exterior stadium signage, scoreboard signage, campus directional signage and logo placement on the court. Additionally, Jersey Mike’s will receive promotion through a variety of print, digital, radio and television assets.

“Rutgers University is a home state neighbor that shares our values of excellence and community involvement,” said Peter Cancro, founder and CEO, Jersey Mike’s Franchise Systems Inc. “Jersey Mike’s is proud to partner with Rutgers Athletics and celebrate the school’s many dedicated student-athletes and their fans.”

This partnership is testament showing that both entities have been on a path of tremendous growth and success over the past several years. Rutgers men’s basketball, women’s basketball and Rutgers wrestling have all enjoyed successes that align with Jersey Mike’s unmatched growth. This year, Jersey Mike’s ranks seventh on Entrepreneur’s Franchise 500, the company’s third year on the Top 10 list, and has over 2,000 locations nationwide.

Both also enjoy a passionate fan base; Rutgers men’s basketball team currently has a sellout streak of nine-straight games, and home attendance for wrestling continues to be one of the highest in the country, as Rutgers was fourth nationally in attendance following the 2019-20 season.

The live television broadcasts of nearly all home men’s and women’s basketball, wrestling, gymnastics and volleyball matches offer Jersey Mike’s national exposure. For several of the Scarlet Knights’ sporting events that are streamed digitally, the Jersey Mike’s brand will be visible on a global stage.

Some men still don’t get it: Here’s how you introduce a...