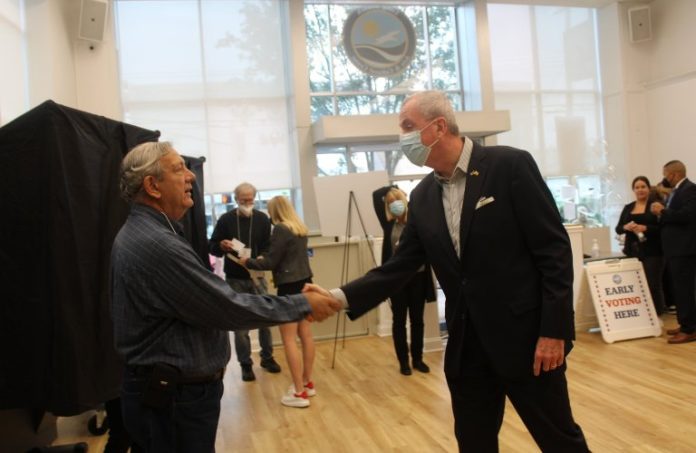 There are two ways to look at Gov. Phil Murphy’s razor-thin victory over Republican challenger Jack Ciattarelli — a race that took an extra 24 hours to call after an Election Day that saw stunning defeats for Democrats up and down the state:

Murphy, appearing Wednesday night in Asbury Park, thanked the electorate for sharing his vision — rattling off a long list of accomplishments as if it were another campaign stop.

He opened with a good line. He said he had the ultimate New Jersey experience, that he was headed somewhere and found it took longer to get there than he planned.

Murphy, however, barely mentioned the reason he was slowed — the unexpected wave of support for Republican candidates that saw a party with 1 million fewer registered voters gain a large number of seats in the Assembly and some in the state Senate.

And, to be fair, he did top his vote total from four years ago on a day when many of his fellow Democrats did not.

But, if you were waiting for Murphy to acknowledge the rise of the other side, you only got this.

The line, however, was followed by promise to continue to work to keep the state moving forward.

And, while so many political pundits said the results Tuesday — in both New Jersey and Virginia — were bad news for Democrats heading toward the midterms, Murphy said he was ready and eager for others to look to the state as a leader, not as a warning sign.

When they do, they will see the first Democratic governor to be reelected since Brendan Byrne in 1977. One who is determined to continue on the path he started four years ago.

The ever-confident Murphy was not backing down, only looking forward — though he did take time to revisit Byrne’s second inaugural address, saying the following words from Byrne will guide him: “We shall be judged in the long run not by how we fared in elections, but by what we did as an administration.”

Murphy said that is the vision going forward.

“These are the words that (Lt. Gov.) Sheila (Oliver) and I, and our team, and each and every single one of us, have lived every single day the past four years and will live by every day for the next four years as we continue the work to make New Jersey ever stronger and ever fairer,” he said. “They will remind us to always, always, always keep moving forward.”

Even if many of his fellow Democrats will not be along for the ride.