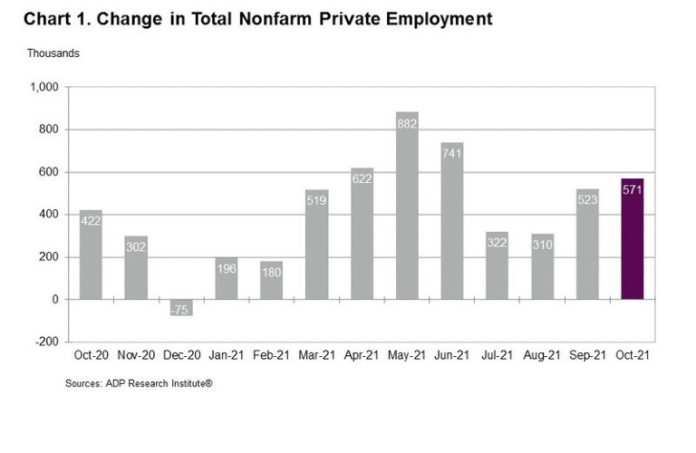 Private sector employment increased by more than half-million jobs in October according to payroll and human resources firm ADP.

The Roseland-based firm said in its monthly ADP National Employment Report that payrolls grew by 571,000 positions from September to October.

The service-providing sector added 458,000 jobs for the month, with the goods-producing sector adding 113,000, ADP said.

Among individual industries, leisure and hospitality led the way, 185,000 hires. Professional and business services added 88,000 while education and health services added 56,000 positions. In the goods-producing sector, Construction led the way with 54,000 jobs gained, and manufacturing was right behind with 53,000 jobs added.

Mark Zandi, chief economist of Moody’s Analytics, said, “The job market is revving back up as the Delta-wave of the pandemic winds down. Job gains are accelerating across all industries, and especially among large companies. As long as the pandemic remains contained, more big job gains are likely in coming months.”