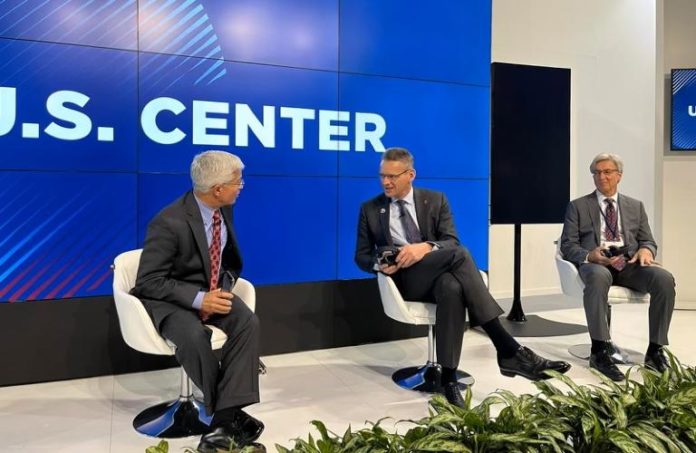 Public Service Enterprise Group Chairman and CEO Ralph Izzo, long a thought leader on climate change and taking action to fight it, is pleased at what he is seeing at the global Convention of Climate Change — better known as COP26 — sponsored by the United Nations in Glasgow, Scotland.

“There is clear momentum building internationally to do more,” he told ROI-NJ. “Countries are here boasting about their efforts, which suggests national pride in taking action even though so much more needs to be done.”

Izzo, who will be on panels Monday and Tuesday (see details here), said the fact the conference is missing two of the world’s biggest offenders — Russia and China — does not take away from the definitive progress being made.

“To be sure, we need all countries to participate to counteract climate change,” he said. “But we shouldn’t let the hesitation of others become an obstacle to our leadership.”

Instead, Izzo said, advances made by countries at the event can spur actions of those who aren’t — and spark more actions from those who are.

The industry — and the movement on climate change — is one that can benefit from a domino effect, Izzo said.

“Think about this: New Jersey and other states on the East Coast have taken the lead in encouraging offshore wind,” he said. “The leading companies in this area are European. That’s because offshore wind has been prominent in Europe for many years.”

Izzo said the U.S. can be a leader in other areas — and have other parts of the world follow that lead.

“If the U.S. aggressively pursues carbon reduction, we will see U.S. companies develop technologies that can be exported to other countries when they eventually get more ambitious about reducing carbon,” he said. “We can develop batteries, EV charging equipment, advanced nuclear, higher conversion efficiency solar, more efficient appliances and a whole host of other stuff that can form the basis of a major export-oriented economy.

“It’s an opportunity to lead.”

Izzo, one of three U.S. utility CEOs to be invited to the event, will speak on a panel Monday afternoon (morning in New Jersey): “From Pledges to Progress: Decarbonizing Today to Meet Tomorrow’s Ambition.” Get more information here.

On Tuesday afternoon (9:30 a.m. EST), Izzo will be featured on a virtual Bloomberg-sponsored renewable energy panel, “Accelerating the Adoption of Renewable Energy.” Get more information here.

Izzo took time over the weekend to answer a few questions on his trip. Here’s a look at the email conversation, edited for clarity.

ROI-NJ: How did you get the invite to the prestigious and important COP26, and how will you be participating?

Ralph Izzo: PSEG, in partnership with the Edison Electric Institute, which is the U.S. trade association for electric utilities, has been actively monitoring the pieces of legislation making their way through Congress related to climate change.

When EEI determined which companies should go over to this COP26 meeting, they wanted to pick a handful of companies that had a track record of action. PSEG has been very active over the years, doing a lot to battle climate change through energy efficiency, offshore wind, preserving our nuclear fleet, investing in infrastructure and other things. We were one of those companies selected to represent the U.S. industry, and it’s been a great experience so far.

ROI: When you interact with officials from outside the country — both in politics and industry — what are some of the differences in approaches and philosophy that you see? And is it possible to bring some of those views to New Jersey and the U.S.?

RI: The discussions with officials from outside the country are probably some of the most exciting aspects of the trip. As an example, in Europe, the countries are all-in regarding a price on carbon, something that we’ve talked about in New Jersey and United States, but we haven’t done yet. They see tremendous benefit from letting the market figure out how to reduce carbon by sending this clear economic signal. I also can’t help from noticing different philosophies as it relates to technology. For example, England, France, China, Korea and Japan are investing and reinvigorating their nuclear industries.

Probably the biggest divide I’ve seen in terms of philosophy or views of technology has been between the developed world and the developing world. But it shouldn’t come as a surprise that the developing world prioritizes addressing other challenges that they face, with examples such as building their health care system and building potable water supplies, so their ability to dedicate resources to other areas is limited.

ROI: You mentioned that countries are boasting about their actions in climate change, which is a clear sign that efforts of many are finally have a dramatic impact. Talk about the push to do more, who is leading that charge and how quickly those efforts can lead to more action?

RI: Something that has left a big impression on me has been the amount of protest activity outside the proceedings — and it is primarily driven by young people. They want immediate action, because they know that our inaction will leave an even bigger mess for them to clean up.

These conversations are necessary even if there isn’t an obvious immediate impact in 2022.

Finance
Linda Lindner -
July 6, 2022
EisnerAmper, the business consulting firm with a major presence in New Jersey, on Wednesday announced it added Ryan Sievers as a partner in its...

Finance
Linda Lindner -
July 6, 2022
U.S. Retirement & Benefits Partners on Tuesday announced that Jorge Romero has joined the company as its senior vice president of corporate development. In his...