Home Diversity & Inclusion Diversity Gala preaches call to action: ‘Do we have the will’ to...
Facebook
Twitter
Linkedin 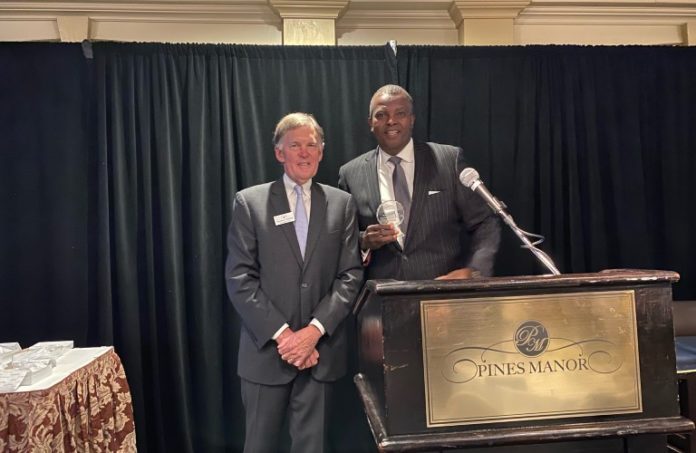 John Harmon, as he always does, put it in perspective, kept it real and spoke the truth.
Harmon, the head of the African American Chamber of Commerce of New Jersey, was thrilled that the first-ever statewide Champions of Diversity Gala brought a crowd of 300 people to the Pines Manor in Edison on Wednesday night — double the number that was expected.

But he and state chamber head Tom Bracken made it clear: The dinner was not a conclusion, but a beginning. And that it was up to the people in the room to ensure that it goes forward.

“Tonight represents a major step toward a cohesive strategy that will improve the overall competitiveness of our state,” Harmon said. “The operative words are, ‘our state.’ Through mutual acknowledgement and accountability, we are forging a pathway to success that potentially could be a model for the nation.

“Success is our goal. However, the question we have to answer is: Do we have the will?”
Harmon, who has been a statewide leader on diversity, equity and inclusion issues decades before anyone had heard the term ‘DEI,’ said the time is now.

“The recent election results underscore the need for a receptive ear to the voices that have been ignored,” he said. “We have an opportunity to structure the outcomes of tomorrow’s dreams through our alignment tonight.”

The event honored five groups for their diversity and inclusion efforts, including:

And it included a keynote from Monique Nelson, chair and CEO of UWG, a multicultural advertising agency on the importance of diversity in the workplace.

Simply put, it brought much-needed discussions to the forefront.

That, Bracken told the crowd, was the goal from the start — even if he and Harmon didn’t quite realize it.

“When John and I started this about a year and a half ago, we had no idea what we were doing, we had no idea what to expect,” Bracken said. “Last year, after we attended the U.S. Chamber Equality of Opportunity event, we sat together and said, ‘This is something we have to do in New Jersey.’

“We thought, ‘If we put together the resources and talents and influence of our two chambers — and include our member companies and our board of directors — we can make a significant difference in advancing diversity and inclusion in New Jersey that would emulate what the U.S. Chamber was doing on a nationwide basis.’

“Our goal was to be a beacon of light throughout the United States and show other states what a state can do when they put their minds and energy and assets for a diversity and inclusion initiative.”

Bracken reiterated the idea that the gala was a start, not a finish.

“There is something that each of us and each of our companies can do to expand the principles of diversity and inclusion. We can think differently about our hiring and promotion practices, we can build sustainable partnerships with schools and programs contributing to the talent pipeline, we can think strategically about supplier diversification, and make sure that our boards are more reflective of the communities they serve.”

“This is an invitation to take a deeper dive. We’re only just beginning. And we’ll be counting on all of you to help us change the field of play, so that everyone in New Jersey has equal opportunity for economic success.”

Harmon, as he always does, got the final word.

He noted this is not a black-and-white issue — and that all groups are invited and encouraged to be a part of a mission that doesn’t come along often.

“Tonight is so significant, in a number of ways,” he said. “And it’s significant because each of you have an opportunity to make a difference. All of us have read books about folks who’ve done great things and passed that information along to our children and so on and so forth.

“When I look out at this audience tonight, I see New Jersey,” he said. “This is our state. And the more we gather like this, the more we engage each other, the more we’ll find that we have a lot in common.

“That’s what this is all about tonight: How do we get New Jersey to be the most competitive state in the country? It’s through this type of gathering, with the resources and the opportunities and information that exists within this room — ignited with the talent. That’s a transformational combination.”

The New Jersey Corporate Community stepped up to sponsor the event.

Medina, CEO of Statewide Hispanic Chamber, to give commencement address at...