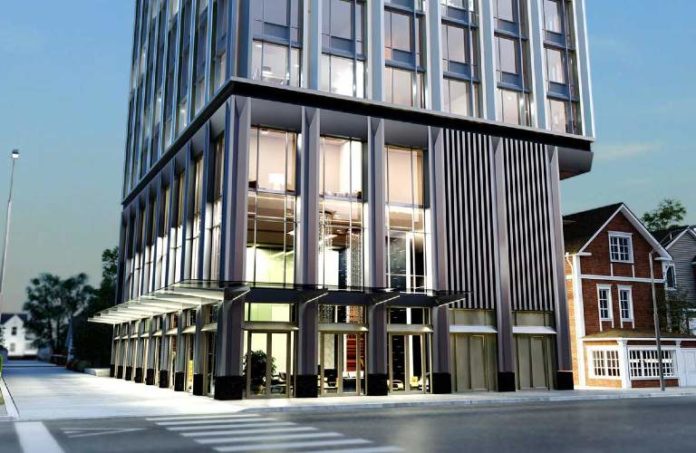 More than 800 multifamily units for Jersey City — located in high-rise, mixed-use towers in residential neighborhoods — are a step closer to reality now that the Namdar Group has completed a $96 million combined construction and land loan in Journal Square from SCALE Lending, it was announced late Friday.

The financing, which was arranged by Drew Fletcher, Matthew Hirsch and Bryan Grover of Greystone Capital Advisors, includes both the ground-up construction of a 235-unit, multifamily development at 26 Van Reipen Ave. and the acquisition of 400,000 square feet of fully entitled land at 626 Newark Ave., allowing for 576 future units.

Officials at SCALE Lending, a Slate Property Group affiliate, said the loan marks the latest closing for the group, which has loaned more than $1 billion over the last 18 months.

The property at 26 Van Reipen Ave. will be a 27-story, mixed-use building that will transform a quiet residential area near Journal Square. The project will include an expansion of the pedestrian plaza, retail space on both the ground level and the second story, office space on the third floor and then 235 units on top.

The building will include studios and 1- to- 3-bedroom apartments and will feature a pool and an amenity space on the rooftop, which will offer views of New York City.

The building, one of three the Namdar Group is building in the area, will be a few blocks from the Journal Square PATH station.

Representatives from the Namdar Group and SCALE were pleased to make the announcement.

SCALE co-founder and Principal Martin Nussbaum said the transaction is another example of the firm’s continued expansion in the metropolitan area.

“To be able to work again with the Namdar Group, who is an institutional developer with a proven track record in the marketplace, is a great opportunity for SCALE,” he said. “We believe in working with top-tier sponsors on a repeated basis as they grow their portfolios.

“In such a competitive and exciting market, SCALE used its relationships with the borrower and broker to creatively think outside of the box to execute a complex deal structure.”

Effy Namdar, the chief investment officer at the Namdar Group, returned the accolade.

“We are excited to get to work with SCALE once again, as they have proven themselves to be a true leader in the market with a clear vision for how to tackle seemingly complex projects,” he said.

Kislak is sales agent for former Franklin Steakhouse in Nutley

Cushman & Wakefield: Former ‘Bat Factory’ site in Kearny to be...