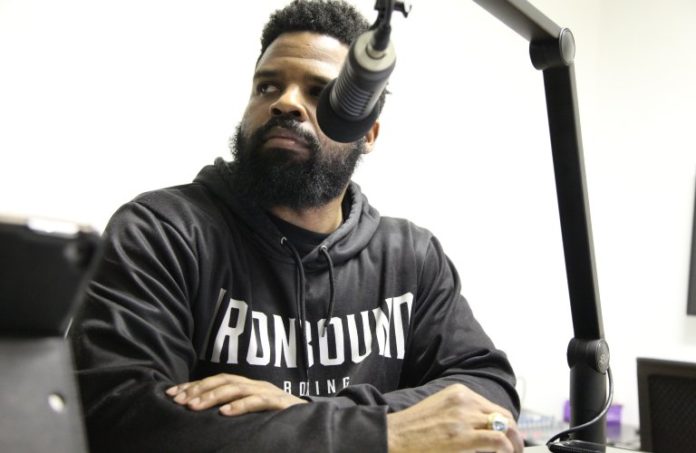 It’s somewhere like a coffeeshop that businesspeople, entrepreneurs and nonprofit heads end up when intent on picking each others’ brains, Newark entrepreneur Mike Steadman notes.

But, he has a different suggestion. …

Next time you’d invite someone to coffee, invite them on your podcast instead.

Steadman’s novel tech startup, one of several spinoffs from his IRONBOUND Boxing & Education community nonprofit mentorship program in Newark, is helping local companies build and launch their own branded podcasts.

His for-profit business, IRONBOUND Media, frames podcast recordings like studio albums. The idea of the business, which launched in the middle of a rocky 2020, is to sell the production of album-length, 10-episode limited podcast series tied to a company’s brand.

As chart-topping as podcasts have become, Steadman said there’s a dearth of know-how when it comes to creating one as a business or organization. Those out there often get styled after weekly radio shows and lack personality, he adds. Or they’re too promotional.

“Podcasts are — or, at least, should be — super intimate,” he said. “This should be a way of creating a branded asset with a brand’s messaging that allows you to go out and engage with your organization’s ideal audience. And it actually really gets you to a deeper understanding of your brand and who your perfect customer is.”

As a practical concern, one might ask: With so many podcasts competing for an eager set of ears, how many people can you actually get to listen to a company’s podcast?

Important as it might sound, Steadman said the first worry should not be about the download tally.

“In our mind, that’s all vanity metrics,” he said. “Listen, if you have only 10 listeners … but those listeners have gotten super engaged, and every time you post an episode, you’re getting texts from them, you’re building branded content that’s creating value.”

IRONBOUND Media tries to promote podcasts as a way of heightening customer engagement with a core clientele. Steadman argues that this is a way of building a following as a brand that no other advertisement might be able to.

Ultimately, he adds, that’s where the potential of revenue increases comes in.

But another mindset adjustment companies have to make is this one: The podcast itself shouldn’t be expected to carry a revenue-generating potential for a company. It’s not going to be inherently profitable.

“Podcasters, outside of the Top 1%, just don’t make money,” Steadman said. “If you’re the Michael Jordan of podcasting, someone like Joe Rogan, you’re still only making $100 million from your podcast.”

Steadman is still early into this local tech experiment. It’s something he pivoted to as he looked for ways to build on his and his partners’ established health and wellness IRONBOUND brand during the pandemic’s new emphasis on the virtual.

The theory was that, with so many schools and their entrepreneurs going remote, there was a major opportunity for the Newark organization to get involved in helping local incubators and accelerator programs launch branded podcasts.

Steadman was wading into new territory, and found that these potential names in the startup-related podcasts didn’t have much in the way of money set aside for marketing and promotion.

“So, as I found out, they weren’t the best clients,” he said. “However, with veteran-owned companies and organizations, I had a lot of credibility in that space … and, in the past year, I’ve found it to be a good niche doing this work for that community.”

A former officer in the Marine Corps, Steadman ended up in Newark after a stint in the military. Then Steadman, also a former national collegiate boxing champion, started a free boxing gym for young men and women of color in 2017 in partnership with the city.

That military background informs a lot of Steadman’s work today. And it’s why Bunker Labs, a Chicago-based program for veterans and their spouses to grow startups, was IRONBOUND Media’s first big client. The podcast, which Steadman also stepped in to host, is a series of interviews with veteran entrepreneurs within Bunker Labs’ ecosystem.

The Haddonfield-based MCFA Energy & Infrastructure is one of the startup’s more local clients. The podcast it created with the Newark entrepreneur features personal stories about the company’s founders, their veteran roots and the vision they have for the company.

More than half of IRONBOUND Media’s customers so far are veteran businesses. Steadman knows that’s a niche he can be successful with, and he’s sticking to it.

Finding the exact right client to market to — and spending all your marketing efforts luring that client in — is the same approach he thinks makes a company’s podcasts worthwhile, too.

“So, I think we’re planning to keep this a smaller business for that reason, one that’s a go-to in the category of building podcasts for veteran-owned businesses,” he said.