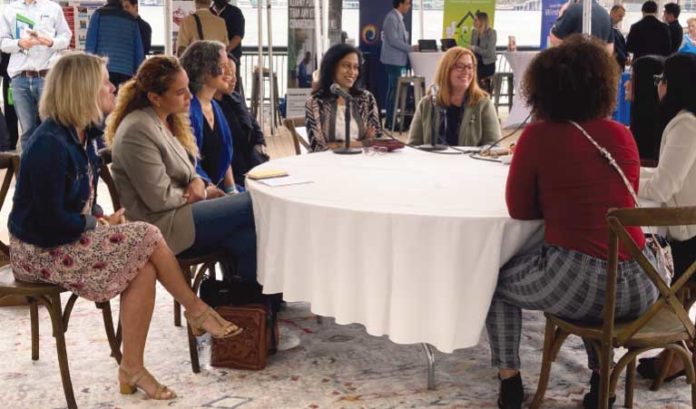 The biggest tech story of the fall was the Propelify Innovation Festival, which took place Oct. 6 on the Hoboken waterfront overlooking New York.

Not only was the event successful, with optimal weather, great speakers and booths filled with enthusiastic vendors, the day was also filled with tangible and intangible benefits for those who attended.

As one of the first tech and entrepreneurship networking events to happen in person after the intense COVID-related lockdowns and a year and a half of Zoom meetings, Propelify had an atmosphere that was indescribable.

Was it a general feeling of happiness at seeing the thriving New Jersey tech community? Was it happiness at having the chance to network and connect with others again? I think it was both.

As I walked through the event, people stopped me on all sides. Some ran up to me and wanted a hug, others reached out and said they wanted to catch up with me, yet others wanted to talk about their startups in depth, so they would be on my radar.

After the event was over, I spoke to a number of founders of tech and life-science companies who were there. I asked them to tell me the one thing they would be taking back to their offices to inspire them over the next year. The overwhelming answer was “connections.” Despite all the inspiration and wisdom offered by the speakers at the event, the most important thing in this post-pandemic world was the opportunity to connect. And, at Propelify, people were able to make connections that would move their businesses forward.

Here are just some of the people I encountered Wednesday, in no particular order:

Mukesh Patel, of Rutgers Business School, was there with some of his entrepreneurship students. We got talking about Sahil Patel, who is a Rutgers University and Stevens Institute of Technology alumnus and the CEO of BettorFantasy, a startup based in Stewartsville that seems to be going places. The team wasn’t at Propelify, because they were among the five startups that qualified for the prestigious pitch competition at the Global Gaming Expo, which was taking place in Las Vegas on the same day.

Loralyn Mears was at the booth for her startup, STEERus, based in River Vale, an edtech company that provides soft skills training, as well as professional and personal development help, to entry-level talent and to people moving up in the ranks. The topic of soft skills has been discussed at many conferences I’ve been to, with no one having a good solution as to how to teach these essential abilities to people in the tech industry. I think  Mears is on to something. She’s about to test with real customers, she said, and that will give the startup the answers it needs.

I ran into Ian Goldberg, founder and CEO of iSport360, based in Manalapan, and he introduced me to the rest of his team. They’ve been at it full-time for quite a while now, and they’re growing quickly. The startup has a player-centric youth sports platform focused on team development and culture, so every player can build his or her athletic skills and life skills. Goldberg reminded me that they’ve been funded and have several youth sports organizations using the platform across their leagues. The NHL has started rolling iSport360 out to its youth hockey programs, starting with the Arizona Coyotes and Carolina Hurricanes. The startup is also in the final round of selection for NBA Launchpad, which would result in a pilot with Jr. NBA programs across the country.

Pete Chmiel stopped to chat about his fledgling startup, Go! NFT Yourself, based in Sayrevillle, which is playing in the quickly growing world of non-fungible tokens, or NFTs. The vision, he says, is for artists, brands and personalities to be able to mint, market and sell scarce, valuable NFTs. Creators can take back control of their intellectual property and promote their brands in innovative ways. They can connect with their own fans or supporters to sell NFTs directly, and later on get royalty revenues on secondary sales, as NFTs are bought and sold.

Denise Brouder wanted to update me on SWAYworkplace, in Westfield. The quick news is that the company’s hybrid work training business is growing rapidly, with customers from California to New York. According to Brouder, SWAY believes employees will end up spending 60% of their time working where they live and living where they work. And this trend will fundamentally change the local business landscape.

David Barnett, whom NJTechWeekly.com profiled in 2019, told me he had sold his original business, Corsis, and the spinoff, Datafy Health, both based in Livingston, and was out at Propelify just to meet people and network.

I met new members of the teams at the New Jersey Economic Development Authority and the NJEDA’s Commission on Science, Innovation and Technology. And I spoke briefly with the CSIT executive director, Judith Sheft, about the programs CSIT has been administering, which connect science startups to laboratory and technical resources at universities and labs in the state.

I chatted with one gentleman and asked him how he felt about the festival. He said he had only come to figure out what companies were around and what they were doing. Then he went into the OwnBackup booth simply to talk to the Englewood Cliffs-based company — and wound up being recruited! It was a surprise to him that something like this could happen at Propelify.