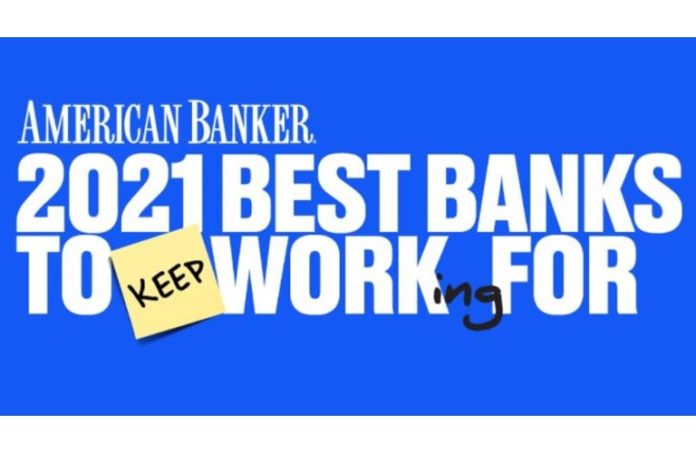 Three banks from the Garden State have been named as one of American Banker‘s 2021 Best Banks to Work For. The program began in 2013 by American Banker and Best Companies Group to recognize and honor U.S. banks for outstanding employee satisfaction.

Ninety banks across the country were named to the list, and each was asked how it is handling challenges associated with hiring and retaining talent. Many banks on the list highlighted internal development programs for employees, increased 401(k) matches or remote working arrangements. Some talked about changing the ways they’ve been looking for talent, expanding the search outside their footprint now that they are offering remote working, and seeking new skill sets and backgrounds instead of focusing on bank experience. Peapack-Gladstone Bank in Bedminster, Manasquan Bank in Wall and Lakeland Bank in Oak Ridge were named Nos. 51, 56 and 79, respectively.

“It is an extraordinary honor to be named among the 90 banks that are considered a Best Bank to Work For in the financial industry,” said Thomas Shara, CEO and president of Lakeland Bank. “I am personally thrilled with this distinguished recognition, and have always known that we are a premier bank because of our amazing associates who continually go above and beyond to serve our customers and each other.”

Determining the Best Banks to Work For involves a two-step process. The first step involves an evaluation of participating companies’ workplace policies, practices and demographics. In the second step, employee surveys are conducted to directly assess the experiences and attitudes of individual employees with respect to their workplace. The combined scores determine the top banks and the final ranking.

Best Companies Group managed the overall registration and survey process and also analyzed the data and used its expertise to determine the final ranking. Full results of this year’s program are available at American Banker and in the November issue of American Banker Magazine. The program is open to commercial banks, thrifts, savings banks and other chartered retail financial institutions with at least 50 employees in the U.S. For more information on eligibility or other questions related to the Best Banks to Work For program, click here.

Show & Tell: Ashley Koning talks about how New Jerseyans were concerned about high taxes 50 years ago