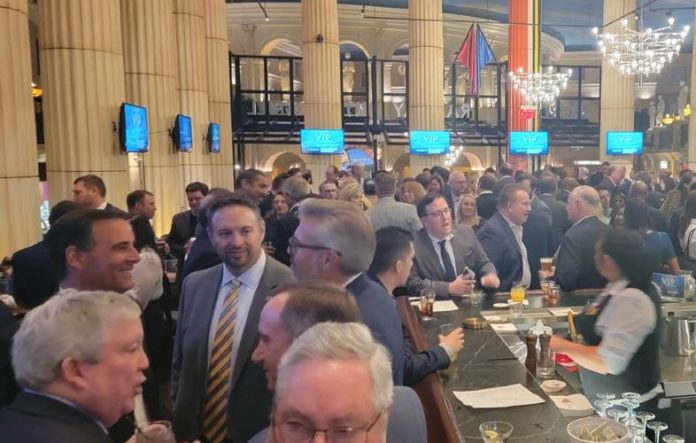 As CEO of the Chamber of Commerce Southern New Jersey, Christina Renna is used to throwing events. Lots of events.

But even she admitted she didn’t know what to expect when her chamber hosted a prime-time party on the opening night of the New Jersey League of Municipalities’ annual conference Tuesday at Gordon Ramsay’s place at Caesars Palace in Atlantic City.

By the end of the event — as the overflow crowd moved on to the next series of parties throughout the town — Renna was more than pleased.

“We didn’t know what to expect, given last year’s hiatus, but we were pleasantly surprised,” she said.

The numbers backed up the excitement.

Parties throughout the opening night of the League had a similar feel.

The Statewide Hispanic Chamber of Commerce of New Jersey event at Noyes Arts Garage had its biggest crowd ever. The Insider NJ party at Cuba Libre spilled into the lobby of Tropicana. (I’ll admit, I didn’t make it to the midnight party at Harrah’s thrown by Atlantic City Marty Small).

To be fair, there were not as many parties at the League as there have been in the past. But, just as clear is this: The desire to be out and about is great — and growing.

John Harmon, the head of the African American Chamber of Commerce of New Jersey, saw it at his event at the Hard Rock. Not that he was surprised. He saw it the week before when a diversity gala his chamber put on with the New Jersey Chamber of Commerce drew more than 300 people — or double what was expected.

“People are eager to reconnect and foster mutually beneficial exchanges,” he said.

Business leaders weren’t the only ones looking to make those connections in A.C.

Belleville Mayor Michael Melham said he was glad to be at the League — and feels he wasn’t the only one.

“I think, if you go by the attendance here, people have been chomping at the bit to get outside and see people face to face and talk to them and network,” he said. “Parties are packed. Conferences are packed. Casinos are filled up. People are very comfortable getting out to network again.”

One of the main reasons for that? Rightly or wrongly, people clearly are getting comfortable networking without masks.

While masking and verifying vaccines status was a major initiative at the Convention Center, which featured the panel discussion and exhibitor hall, it was not part of the party protocol at any of the half-dozen events I attended. There was an assumption that everyone was vaccinated.

And there was an overwhelming sense that being out was a plus for our overall well-being.

Carlos Medina, the CEO of the Hispanic chamber, said the parties serve a number of purposes.

“There is a desire for in-person networking from our members, not only for the business connections, but also for our mental health and well-being,” he said.

Of course, you can’t get past this fact: Business is better one-on-one. So said Jonathan Jaffe, CEO of Jaffe Communications.

“There are impromptu conversations that that come with this,” he said. “A lot of different ideas are shared.”

“I wanted to come down and network with the new businesses to see what’s cutting-edge and take it back to my municipality,” he said.

And then, there’s this: There is no easier way to get a new client.

Bruno Tedeschi, the founder of Shadrach Stephens, a Newark-based public relations firm, may have hit it big on the first night.

“I met a potential client at an event Tuesday afternoon, set up a meeting Wednesday morning and have a third meeting on Friday at his office in Newark to meet his business partner,” he said.

“Some people mistakenly think the after-parties at the League of Municipalities are about partying, but for me, it’s always been about business,” he said. “After 18 months of Zoom calls and canceled events, it’s even more important to be here to let everyone know you are still alive and kicking.

“And there’s nothing better than when an old connection introduces you to a new connection that can potentially lead to new business. That makes it all worth it.”

The event wraps up Thursday. Gov. Phil Murphy is expected to headline a lunch before he returns to Trenton.

Event-goers will return to their respective parts of the state as well. Not to worry, there will be plenty of opportunities moving forward. Remember, the gala season — even an abbreviated one — is coming soon.

This top doc was eager for any COVID vaccine — but...