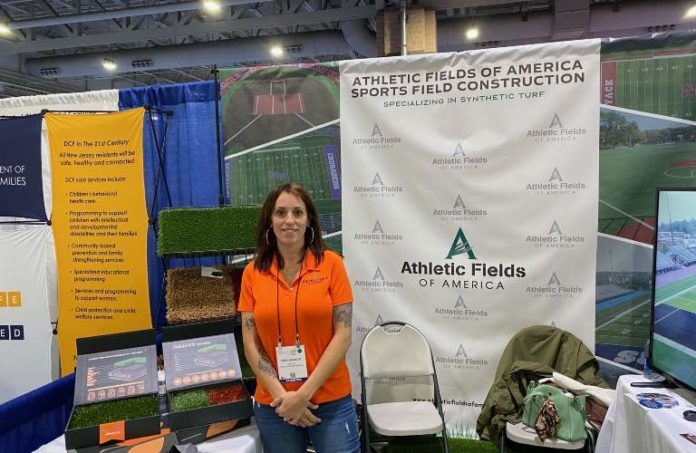 Cory Handler has been coming to the New Jersey League of Municipalities conference since 2007.

As an estimator for Athletic Fields of America, a Montville-based company that specializes in installing artificial turf fields for towns, she’s always known there’s no better business development opportunity than one that brings leaders from almost every municipality to one spot.

But she didn’t fully realize it until last year, when the event was canceled due to the pandemic.

“It’s fair to say we were really looking forward to it,” she said. “Last year was a little bit difficult. You can Zoom and you can talk all you want, but getting that face-to-face interaction and just having people walking by and saying, ‘You know, we’ve been thinking about putting a turf field in,’ is invaluable.

“People want to see it and touch it.”

The dozen or so business cards she already had collected by noon Wednesday, the second day of the three-day event, proved her point.

Handler wasn’t the only one making it.

Exhibitor after exhibitor — more than 500 in all — were thrilled the League of Municipalities was back.

While so many in the state view the annual event in Atlantic City as one big party and networking tour — and there were plenty of parties — the event serves a vital purpose for municipal leaders. There are panel discussions and continuing education throughout. And then, there is the exhibition floor, where a large variety of businesses and services have set up booths in an effort to connect with municipal leaders.

And, while the event was back after a year hiatus, the impact of the pandemic certainly was everywhere.

Officials from the league strictly enforced masking policies upon entry — and no one was allowed upstairs to the exhibition until they had been verified as having been vaccinated.

No one seemed to mind.

There was a strong desire to meet new business connections — or reconnect with old ones.

Lauren Cassel, an account manager at Millennium Communications, said the company obviously wants to attract new business, but it was just as excited to see current customers in person.

“Talking into a screen is not the same,” she said.

The company, which has been in business for more than 25 years, does work with more than 300 municipalities in the state, providing technology solutions.

“We do anything from switching, routing, wireless, to security cameras and access control,” Cassel said. “We’re unique in that we have the ability to wire everything. We can sell you the equipment, and then install, configure and run the mobile wiring for it.

Invest Newark has a new name and a new mission.

It’s no longer just a marketing vehicle for Newark, but an organization intended to serve small businesses. And, as Chief Financial Officer Kevin Collins pointed out, the organization in the state that oversees a land bank.

Collins said Invest Newark is eager to explain the process to our municipalities.

“We’re certainly interested in what other municipalities are thinking about when it comes to their blighted vacant properties,” he said.

It’s not all business.

Jackie Cornell, a former state Department of Health official, said the event was a perfect way to let municipal leaders know about the social services Unite Us can offer.

“We are a health care technology company,” she said. “We work to bridge the social services gaps that exist in communities.”

It’s a way to ensure that the most vulnerable get the continued care they need. And, while Unite Us works with the major hospital systems in the state, most municipalities have a need — but don’t have a hospital.

“We want them to all join our network to ensure that everyone gets the services they need,” she said.

The event was universally viewed as a success. And a new normal.

“Some people are still waiting to go back to the way it was,” Cornell said. “This is the new normal. This is the way it’s going to be from now on. And that’s OK.”