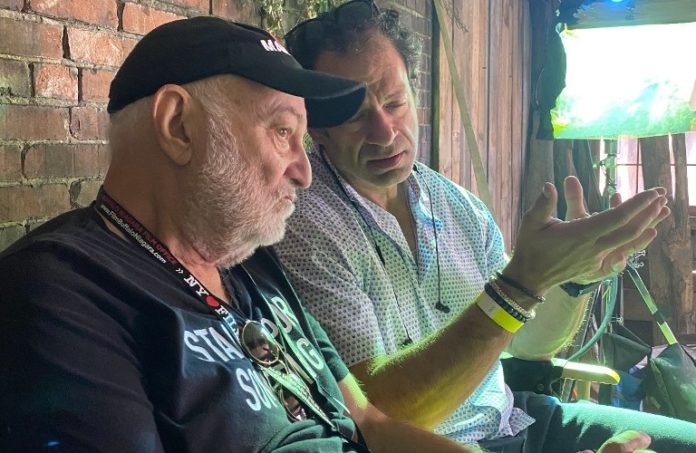 Founder, CEO and chief information officer of Circle Squared Alternative Investments, Jeff Sica is also the president and CIO at SICA Wealth Management, a Fox News contributor, the owner of Montclair’s MC Hotel and now the co-producer of a movie about the life of Francesca Cabrini.

An Italian immigrant woman who built a multinational charitable empire and became the first U.S. citizen to be canonized as a saint by the Roman Catholic Church, the story of her life is relevant to the issues facing women and immigrants today. The movie is being led by award-winning producer Jonathan Sanger, known for “The Elephant Man,” “Flight of the Navigator” and “Vanilla Sky,” among many others.

How did Sica get involved with this film? Thursday evening at the MC Hotel, he invited a gathering of about 100 friends to explain. As an entrepreneur, Sica is always keen to what he might venture into next and he has a talent for connecting the right people with the right opportunity for great synergy and successful outcomes.

“I’ve been involved in the film business for almost 20 years, but mostly in the background. When this opportunity presented itself, it became apparent that this was more than just another film — this was a monumental endeavor, which had the potential to inspire millions.”

“A film producer is similar to a developer in that we are tasked with putting together a team and executing a plan. I use the same skill sets for both roles and find both equally as gratifying.”

Sica explained that, during a meeting with fellow businessman Eustace Wolfington, he embraced the intention of bringing this inspirational Cabrini story to the screen in the as-yet-untitled movie.

“The world doesn’t know Francesca Cabrini and, after this film, they will know her and be inspired by her legacy,” Sica stated. “For women, for entrepreneurs, for immigrants, she is a beacon of hope in world that has become increasingly dark. Her legacy is beyond compare.”

And Wolfington’s passion was also evident Thursday. His desire to tell the story of Francesca Cabrini seems more of a calling.

“As a pioneer of human rights long before today, her story will be an inspiration,” he said. “It is something I am truly passionate about. I hope you all are as well.”

Wolfington is a revolutionary man himself. He is credited with developing the car lease. His concept of “Half a Car” was to have the customer finance or lease half of the vehicle’s price, then, after two years, the dealer would take the car back and resell the vehicle for the depreciated price. All car leases today are because of Wolfington.

The Cabrini film charts the meteoric rise of an astonishing and audacious woman who — through her relentless perseverance and business skill — overcame the sexism and virulent anti-Italian bigotry of 19th century America, to build schools, orphanages and hospitals that transformed the lives of immigrants worldwide. The film is a powerful exploration of two of today’s biggest issues: immigration and the empowerment of women. Cabrini speaks to our time — a time that more than ever needs the wisdom and example of this unstoppable woman who triumphed against all odds.

Construction began in April in Buffalo on the massive sets that recreate Five Points, a 19th century neighborhood in Lower Manhattan. Filming took place on many Buffalo streets and neighboring locations to double for other iconic New York City sites circa 1890, including the West Park neighborhood north of Manhattan and what is now the posh Upper East Side, before completing principal photography in Rome in December.

“Everyone associated with this movie feels a powerful, almost mystical draw to it. It’s a movie about the best version of humanity and can inspire us all to be better and do better,” said Jill Miller, Sica’s business partner on this venture.

The film is funded through a 501(c)(3). With this charitable model, every tax-deductible contribution is an asset that generates future revenues. Anyone interested in contributing or who would like to have more info can contact Theresa Boetger at 973-975-0731 or  theresa.boetger@circlesquaredalts.com.