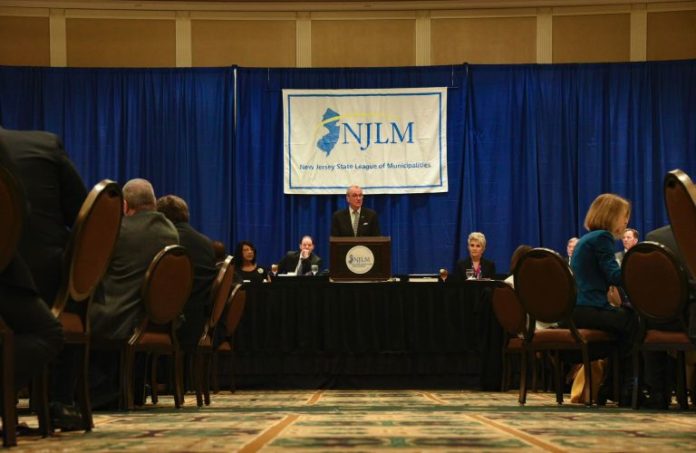 It was in mid-summer that Executive Director Mike Cerra and the rest of the staff at the New Jersey League of Municipalities made the decision: The group’s popular annual conference — the biggest networking event of the year — would be held in-person this year or it wouldn’t be held at all.

No one wanted to repeat the virtual event of 2020. So, the NJLM staff worked with the Governor’s Office, leaders in Atlantic City and state and local health officials to ensure the event complied with all the necessary rules and regulations.

Then, they sat back and waited to see the reaction.

They were overwhelmed, Cerra said.

“Everything has been very positive,” he said. “It’s been beyond what I had hoped for.

“If just being here is a success, then we’ve been highly successful, because I think we’ve gone well beyond that. That’s what I’m hearing over and over. People are just happy to see people again after two years.”

Yes, attendance is down. But only slightly. At approximately 14,000 people, attendance is off by about 10% from the 2019 event. But that’s far better than it was expected. Cerra said he figured attendance could be down by as much as 25%. The exhibition space was strong, too, with nearly 600 exhibitors, he said.

More than the attendance, however, was the enthusiasm.

“Clearly, there was some pent-up demand and excitement and a desire to grab back some normalcy,” Cerra said. “Just judging from our registration numbers or exhibit numbers and just sort of the general feeling of the conference.

The three-day event was capped Thursday with a luncheon speech by Gov. Phil Murphy.

Cerra spoke with ROI-NJ about the event. Here’s a look at the conversation, edited for space and clarity.

ROI-NJ: It was obvious that we were in the midst of a pandemic. All registrants had to show proof of vaccination and wear a mask indoors (even though a small percentage did not). Was there any pushback on that?

Mike Cerra: There were one or two comments, but even the folks who expressed displeasure also said they realized it’s what we have to do this year in order to have an event. We didn’t want to have a mask-mandate panic. We didn’t want that vaccine requirement. But that’s what you need to do to get through 2021. We’re all hoping that we never have to deal with it again.

ROI: The process seemed to go smoothly. Talk about the planning?

MC: The biggest thing was that we set up remote checks in the lobbies of the hotels with the four biggest blocs of people, so folks were able to get verified before they boarded the shuttle bus. That alleviated lines at the convention center and allowed people to move through pretty quickly. I think that made a big difference. And I think the smooth process contributed to the ‘It’s not that big of a deal’ feeling to it.

ROI: Let’s turn to the overall preparation. Putting on an event with 14,000 people during a pandemic is not an easy lift, is it?

MC: This is always a highly planned event, but, this year, we had to get into even more granular details. I learned about so many things that I had never thought about before. I’ve become an informal expert on CDC and Department of Health policies.

So, there definitely is a sense of accomplishment that it has gone off so well. That’s a credit to so many people, especially the staff at the convention center. The level of professionalism they showed throughout the planning helped make this a success.

Come Friday, the entire League staff is going to sit back and enjoy the moment. And then we’re going to pivot toward 2022.

ROI: Next year: That’s an interesting thought. Will we be ‘back to normal’ or do you think this is the ‘new normal’?

MC: That’s the question. And that’s why we want to take some lessons learned from this. Who knows what 2022 will be like? Maybe there won’t be mask mandates or vaccine mandates, but it’s hard to imagine that we’re going to be completely in a different world at that point.

I think workplaces have changed and, I think, ultimately, you know, conferences and exhibitions are going to have to adapt, however that is.

But I don’t think anything replaces the in-person networking that’s available at a conference like this. So, I know we’re going to be back in Atlantic City next year and for years to come. I think the way we deliver events will change, but it’s not going to happen overnight. Things will evolve. But, again, I think we’ve all learned that nothing can really replace the ability to exchange ideas in person — and that Zoom cannot replicate true networking.