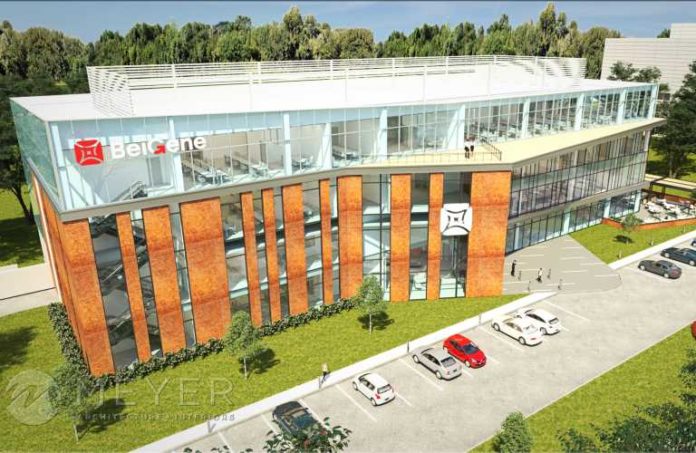 BeiGene, a global biotechnology company focused on developing and commercializing innovative cancer medicines worldwide, made it official Tuesday morning, announcing it has purchased a 42-acre site at the Princeton West Innovation Campus in Hopewell that will house a new state-of-the-art manufacturing campus and clinical research & development center.

The company’s intentions were made clear Aug. 3, when it announced its intention to build such a manufacturing campus — and recruit hundreds of highly educated workers with high-paying jobs.

BeiGene is a global, science-driven biotechnology company focused on developing innovative and affordable medicines to improve treatment outcomes and access for patients worldwide. With a broad portfolio of more than 40 clinical candidates, it is expediting development of a diverse pipeline of novel therapeutics through our own capabilities and collaborations.

BeiGene, which has more than 7,700 colleagues across five continents, says it is committed to radically improving access to medicines for 2 billion more people by 2030.

The exact purchase price was not announced, but company officials said they expect to invest several hundred million dollars in the initial phase of construction, in addition to the acquisition of the property, for the state-of-the-art facility.

The facility is expected to include up to approximately 400,000 square feet of dedicated commercial-stage biologic pharmaceutical manufacturing, including up to 16,000 liters of biologics capacity, along with clinical R&D and office space. Construction of the initial phase is expected to commence in 2022 and be completed in late 2023 or in 2024. In addition, the property has more than 1 million square feet of developable real estate for potential future expansion.

John Oyler, BeiGene’s co-founder, chairman and CEO, said the facility will be a key part of the company’s continued growth. BeiGene is investing in U.S. manufacturing to further expand and diversify its global supply chain and build new manufacturing capabilities for its deep pipeline of biologic and drug candidates, he said.

“With this property acquisition, we plan to establish a flagship manufacturing and clinical R&D center in the U.S. to diversify our global supply chain,” he said. “We are proud to take this next step in our journey to advance impactful treatments and make them more accessible to patients around the world.”

BeiGene already has employees in the state. Oyler is confident it can find many more.

“We have already begun hiring additional colleagues from the deep talent pool in New Jersey and look forward to serving as a member of the thriving Princeton-Hopewell business community,” he said.

Gov. Phil Murphy obviously was thrilled by the announcement.

“We are extremely excited that BeiGene has taken the next step in the company’s push to manufacture innovative cancer medicines right here in New Jersey,” he said. “Our goal, since Day One, has been to create an environment in New Jersey that fosters the growth of companies like BeiGene, and we are excited to see what’s next as the company expands.”

Hopewell Township Mayor Julie Blake said the announcement is great for her community.

“With more new companies, like BeiGene, coming into the Princeton West Innovation Campus, Hopewell Township’s future as a leader in the biotech base continues to come to fruition,” she said. “BeiGene’s expertise in developing innovative cancer treatments, combined with their planned state-of-the-art facility, makes this a win-win-win for Hopewell, BeiGene and the millions of cancer patients whose lives will hopefully improve from BeiGene medicines.

“We are proud that those medicines will be manufactured right here.”

BeiGene acquired the Hopewell property from Lincoln Equities Group and has retained DPR Construction as its construction management firm and IPS as its architectural and engineering firm.