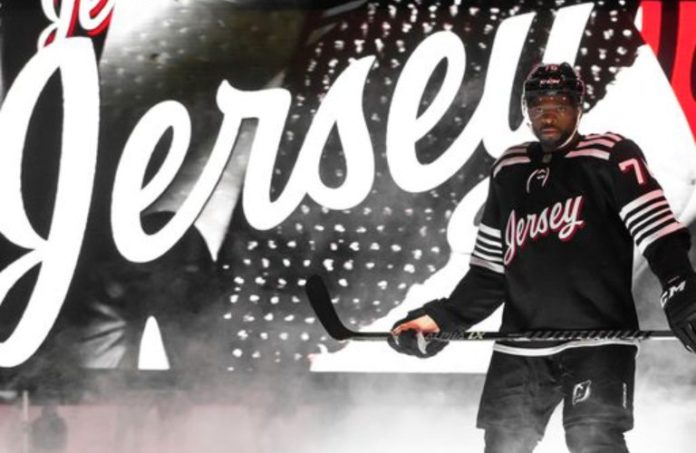 She’s not the only one that feels that way. The uniform, which will be used 13 times this season, starting Dec. 8 against the Philadelphia Flyers, has received universal praise from players on the team now and some of its legends, Frechette said.

It has grit. It has attitude. And it has the word “Jersey” boldly scripted across the front. That’s no accident, Frechette said.

“That script means everything,” she said. “This is a jersey for New Jersey. It’s a nod to the people of New Jersey and it’s a nod to the Jersey mindset. It’s a reflection of our community roots, that we stretch out across the state with a lot of great community programming through the lens of Devils Youth Foundation and through the lens of youth hockey and our grow-the-game initiatives.

The New Jersey Devils’ alternate jersey is available for sale starting Tuesday on the Devils’ page at NHLShop.com as well as at the Prudential Center gear stores. It will be available at traditional retailers starting Nov. 28.

“We really just have this pride of place — and a boastful sense that we want to rep Jersey.”

The Devils participated in the leaguewide Reverse Retro jersey promotion last season, but they are one of just three teams in the NHL that has never introduced a third jersey (the Detroit Red Wings and the expansion Seattle Kraken are the others). The team, which has discussed the possibility as far back as 2014, really got going on it in 2018, shortly after Frechette was hired and Brodeur was brought in as an executive vice president.

Frechette and Brodeur, working in conjunction with both the league and adidas, spent three years getting it right. Nothing was done by chance. Consider just the striping:

Then there’s this: The interior collar has the dates of the team’s three Stanley Cup titles, stitched in grey, the color of the Cup. And there’s the subtly of the dropped red shadow throughout — a recognition of the team’s primary color for its nearly four decades in the state.

Frechette feels like the jersey represents past, present and future of the franchise — a way to move forward into the next generation of Devils hockey while honoring those who came previously. And doing it with an all-black look honors the team’s supporters throughout it all.

“If you have ever spent any time poking around on any fan forums, you will see that our fans are very passionate about one day having an alternate jersey, and that they most definitely want that uniform to be black,” she said.

When it will be worn

The New Jersey Devils will wear the new third jersey for the following games. All will be at the Prudential Center unless noted:

“So, that decision was easy. And Marty and I decided early on that we wanted to have a vintage-looking jersey that paid homage to things from our past, but gave us the ability to take a bold step forward as a brand.”

Frechette said the reaction to the design throughout the process has been positive.

“We had the ability with an early prototype to show it to our captain, Nico Hischier, and P.K. Subban,” she said. “They loved it. So, we knew we were on the right path.

“In recent months, Marty had the ability to show it to Scott Niedermeyer, Patrick Elias and Ken Daneyko. I can tell you that they’re just a little envious that they didn’t get to sort of wear this jersey back in the day. And then, more recently, we photographed this jersey on some of our current players — Dougie Hamilton, Damon Severson, MacKenzie Blackwood, P.K. and Nico — and they’re just so excited. They love what it looks like. They loved it when they put the uniform on head to toe.”

The fans are the only judge left. Frechette said she’s more than confident in what the response will be.

“What makes a hockey fan most passionate is their desire and demand for authenticity,” she said. “And we really nailed that here.

“I think that the players’ enthusiasm will allow for fans to really embrace this jersey. It’s rooted in hockey; it’s rooted in our brand — it was created by a Hall of Famer, and it has this stamp of approval from our current players and our retired players.

“You can’t get much better than that — that is everything to me as a hockey fan and to me as a steward of a brand.”

The team will wear the uniform 13 times — in honor of Hischier’s number — with all but one of those appearances being at home. The only road game, at Detroit on Dec. 18, was selected to celebrate the day New Jersey became the third state in the union (in 1787).

Leagues guidelines suggest an alternate jersey stay in rotation for three years. Frechette said the team will do major promotion during that time, within the arena and throughout the state.

“In January, we launched a brand identity campaign called ‘Made in Jersey,’” she said. “It’s something that we are going to lean into for multiple seasons. And this jersey folds its way into that big strategic plan because it’s everything that we want to be.

“Our players look big and mean in this black uniform, ready to represent Jersey. There’s an arrogance to it and that’s OK with me.”

Frechette, who grew up in Canada, has been in Jersey since 2018. Like the uniform she helped to create, she appears to get the attitude.

“I think there’s a number of teams that practice and play in New Jersey with eyes on New York and New York in their name,” she said. “I don’t believe that is the way to go as a team or as a brand.

“So, all day long, I’m going to be very boastful about how we are the only professional sports franchise in New Jersey that plays and practices and lives here and wears that proudly on our jerseys.”