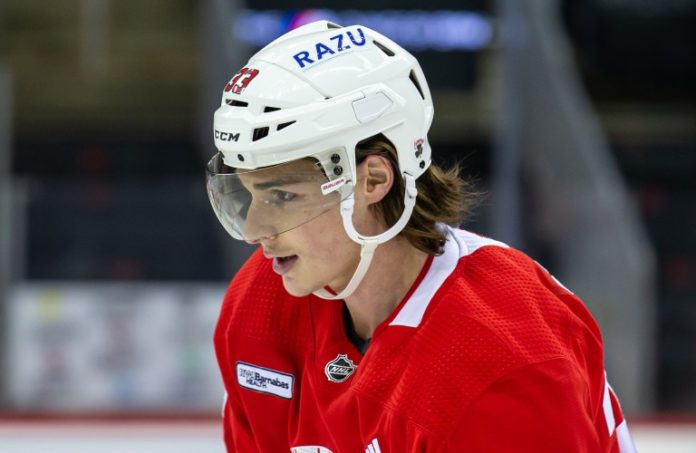 When he applied for the opportunity to have his company’s logo featured on the helmets the New Jersey Devils wear during their games, co-founder and CEO Marc Saint-Ulysse said he wasn’t sure if Razu was what the team was looking for.

After all, his Irvington-based company — a networking and collaboration digital platform for musicians — was only a digital enterprise. And one that was just a few months old, too.

“I’m not going to lie to you,” he joked. “I didn’t think much of our chances, because I thought it would be catered to more established brick-and-mortar companies. I said, ‘Let’s give it a try.’”

Razu is a networking and collaborating service for artists in the music industry, providing music creators the collaborative tools to create and enhance songs virtually. Founded in 2021 by New Jersey natives, CEO Marc Saint-Ulysse and Chief Technology Officer Oluwatobi Adebiyi, Razu is an Irvington-based, Black-owned and operated business. Razu is a community where music creators can discover new talent, regardless of their geographic location. Once an artist finds their collaborative needs, Razu provides the collaborative tools that allow them to create new music on the platform without having to be in the same music studio.

Officials at the Prudential Center, the Devils, Prudential Financial, Invest Newark — and everyone else in the unique Buy Black Partnership promotional opportunity — saw it differently.

They viewed Razu as a Black-owned company led by entrepreneurs with passion and spirit who had a product that not only blended nicely with the sports and entertainment aspects of the Prudential Center — but at all the venues and cities where the Devils play.

After considering hundreds of applications, they said they saw Razu as the perfect choice.

That’s why, this afternoon, the Prudential Center and Prudential Financial will announce that Razu has been selected for a marketing and promotional push that entrepreneurs can only dream of: A 3.75-inch-by-1.2-inch version of the Razu logo will be featured on the Devils’ helmets for 30 road games, starting Saturday against the New York Islanders on Long Island.

As the winner of the Devils Buy Black Program presented by Prudential Financial, Razu also will get exposure on the team’s digital and social platforms. In addition, it will receive marketing and business consultation, physical and digital advertising exposure, financial wellness counseling with a Prudential Financial adviser, local networking opportunities and more.

Saint-Ulysse, who co-founded the company with Oluwatobi Adebiyi, said he obviously is thrilled by the opportunity.

“We’re so grateful,” he said. “It’s an incredible opportunity.”

The Razu logo will be on the New Jersey Devils’ helmets for the following games:

The company, which launched in September, has approximately 200 artists throughout the U.S. using the platform now — members that were gained mainly from word-of-mouth promotion. Saint-Ulysse said the logo promotion and all that comes with it will enable the company to quickly reach another level.

“We’re confident that we’re ready for growth,” he said.

“Big wins take creativity and courage, and Razu rose to the occasion,” she said. “This is a game-changer business moment, as millions of sports fans see Razu’s logo emblazoned on the Devils helmets throughout this NHL season.”

While the promotion will come on the Devils’ helmets, Prudential deserves credit for presenting the opportunity. The company bought the rights to the helmet spot, then decided to donate the spot as part of the Buy Black initiative by Harris Blitzer Sports & Entertainment.

“This is just one example of how Prudential is working to elevate Black and underrepresented entrepreneurs in our hometown and across the nation,” Somersille Johnson said.

HBSE, the umbrella company that owns both the Prudential Center and the Devils, was happy to do its part, too, organizing and overseeing a process that whittled more than 100 applicants to approximately a dozen finalists, three of which advanced to the interview stage.

Ned Luke, senior director of partnership activation at the Devils, said Razu fit the profile the group was looking for in a number of ways — including the fact that the arena is one of the top concert venues in the country and houses the Grammy Museum Experience.

“There’s a tremendous opportunity to actually work with his platform organically outside of what we’re doing with Razu on the helmet,” he said.

The fact that Razu already has users across the country helps, too, Luke said.

“This has tremendous scalability,” he said. “The logo is going to be seen all over the country and Canada. We wanted to make sure that there was a partner this year really could capitalize on the exposure they’re going to get.

“How cool would it be to have new musicians meet through this program?”

Saint-Ulysse said he’s ready to do just that.

The promotion, he said, not only will be great for Razu — but for all the artists who discover it, he said.

“I think this partnership is very fitting for what we’re creating at Razu because of the way music and entertainment intertwine,” he said. “I think there are a lot of opportunities in the arena, whether it’s during games or the different events that occur in the Prudential Center.

“This is something that’s not just good for Razu as a company, but also the independent artists who are creating music on the platform.”