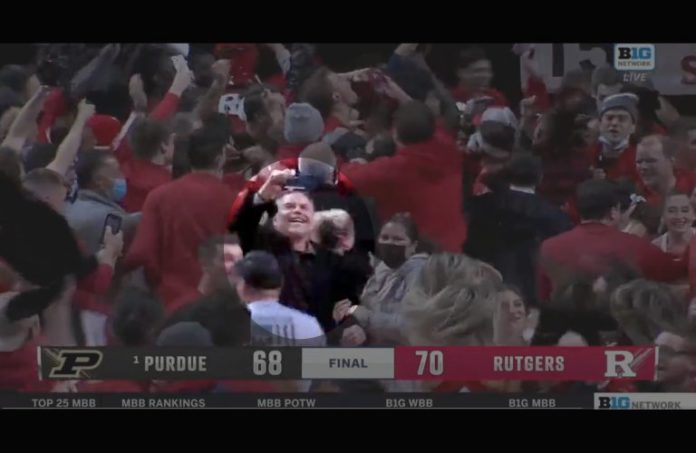 Was that Brian Hague?

Indeed, it was. Hague, the well-known public affairs specialist (and Rutgers University grad), was clearly visible on TV, holding up his phone, recording the madness on the court.

But wait, it only gets better.

When Bleacher Report put out a quick postgame video clip of the final moments on social media — a video that already has nearly a million views — the frame grab that’s used when it is shared features Hague amid the raucous celebration.

Hague, of course, had little idea of his 15 seconds of fame, until he got to his car and found his phone blowing up.

“When we were inside, it was tough to get a signal, probably because so many people were filming,” he said. “But, once we got to the car, I was flooded with texts from family and friends and business contacts all saying the same thing: ‘I just saw you at the Rutgers game.’

“People were telling me they had to rewind the game to make sure it was me.”

The moment in time wasn’t all luck.

In fact, Hague said he and his wife, Alyson — a Rutgers employee — prepared for it. They had to, he said — they were sitting under the basket, right in front of the students’ section.

“When the players came back onto the court for the final seconds, I told Alyson to put her coat on,” he said. “I said, ‘If we win this thing, the students are going to storm the court — we need to be ready.’”

Hague then held up his phone and began recording.

“I just knew it could be a huge moment,” he said.

Hague, a regular at football, basketball and wrestling events at the school, said there was a reason for his premonition. He has experienced such a scene before.

In 2006, when Rutgers beat No. 3 Louisville in football, 28-25, Hague was part of the Rutgers faithful that stormed the field.

“This was the same type of moment,” he said. “Just an incredible atmosphere.”

Hague, the director of government affairs and communications at American Dream, jokes that he won’t be giving up his day job to become an Instagram influencer anytime soon. He knows his social-media moment will be fleeting — just long enough to make his two daughters (both of whom attend Rutgers) a little jealous.

“Like the win over Louisville, this could be a program-altering moment,” he said.

One that was captured all over social media.