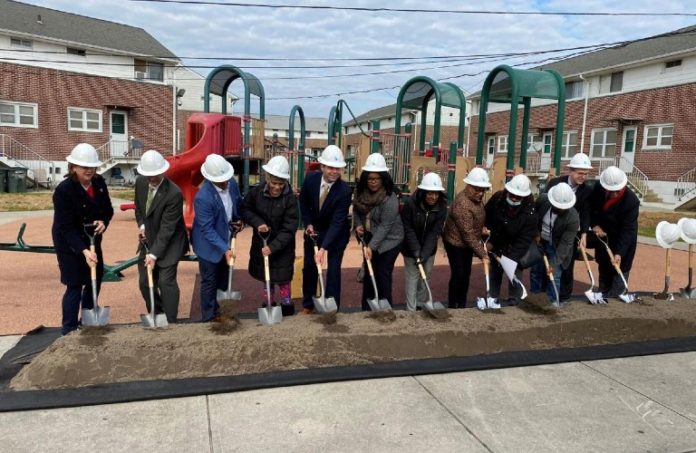 The Atlantic City Housing Authority and the Michaels Organization broke ground Friday on a major rehabilitation effort for Buzby Homes, the 126-unit affordable housing community that has remained largely untouched since its construction in 1952.

The plans for the new Buzby homes include new sustainability and flood resiliency designs, as well as job opportunities for Buzby and surrounding residents. Current Buzby management staff will be rehired when the $15.4 million project is completed, which is projected to be in March 2023.

“Today is a great day for Buzby Homes residents,” Small said. “Over the past few decades, Buzby Homes has fallen into great disrepair, with serious issues that can no longer be addressed with a Band-Aid. This project is a major step forward in strengthening our city, and we applaud the Atlantic City Housing Authority and the Michaels Organization for not only renovating Buzby Homes with the comfort of residents in mind, but for ensuring that the renovations are built to withstand the unique coastal weather challenges we experience.”

“We’re so proud to work with the Michaels Organization to develop modern and environmentally equitable affordable housing for Buzby residents,” said Denise Gordy, interim executive director of ACHA. “Too often, communities like these were originally constructed without a resiliency plan in place to mitigate changes in the natural environment. But, by the time our work here is finished, Buzby will be primed to withstand the literal and figurative storms Atlantic City has grown to face.”

Once complete, Buzby will be one of the most energy-efficient and resilient communities in the city. The community room will in particular feature many resiliency upgrades, including solar panels, an emergency generator, potable water storage tank and energy efficient appliances. The plans were developed by SOSH Architects and Urban Practice, and the engineers on-site will be Arthur W. Ponzio Co. & Associates and RPM Engineering.

“The Michaels Organization built our first-ever affordable housing community in Atlantic City nearly 50 years ago, and we still help manage it and several others throughout the city today,” said Nick Cangelosi, vice president of Michaels Development.

Value Cos. to oversee boutique rental site in Elizabeth