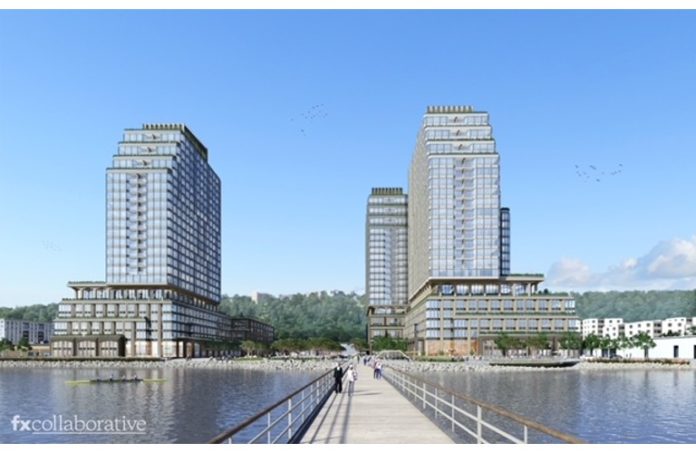 A unanimous and final approval was handed down from the Edgewater planning board last week on the redevelopment of 615 River Road, which paves the way for the construction of one the largest and most exciting mixed-use projects on the Jersey Gold Coast.

The planning board’s action clears the way for the developers, the Maxal Group from New York and partner EnviroFinance Group of Denver, to build 1,200 one-, two- and three-bedroom apartments — of which 180 will be affordable housing units, which will provide 30% of the borough’s state-mandated affordable housing obligation of 624 units — on 19 acres on the Hudson Waterfront. The site was formerly owned by the Hess Oil Co.

The state-of-the-art, 1.2 million-square-foot project will be built in three, 25-story towers that will offer residents views of the Manhattan skyline. The project will also include 20,000 square feet of commercial space, a two-acre public park, a waterfront walkway connected to the existing riverwalk in the borough, and ferry service to New York. To relieve traffic on River Road, the developers propose to construct bus “super stops” that will create loading lanes for both north- and southbound buses along River Road.

A five-acre parcel on the western side of the property that straddles River Road is being set aside as the possible site for construction of a new school.

“We want to thank the planning board for granting us the approvals that we have long sought. We look forward to bringing a sophisticated, quality complex to Edgewater,” said Bruce Sturman, a managing director of the Maxal Group.

Sturman said that, with the planning board approvals in hand, his firm can begin applying for building permits as soon as possible.

“The 615 River Road project will be done with the same extraordinary attention to detail that can be found at our recent luxury residential project that we developed with Hartz Mountain Industries at 1500 Harbor Blvd. in Weehawken,” he said.

The design of the three towers at 615 River Road is being done by architectural firm FXCollaborative of New York. The company has designed many noteworthy projects in the U.S. and abroad, including the New York Times Building, the Northside Piers and 1 North 4th Place — both located on the Brooklyn waterfront.