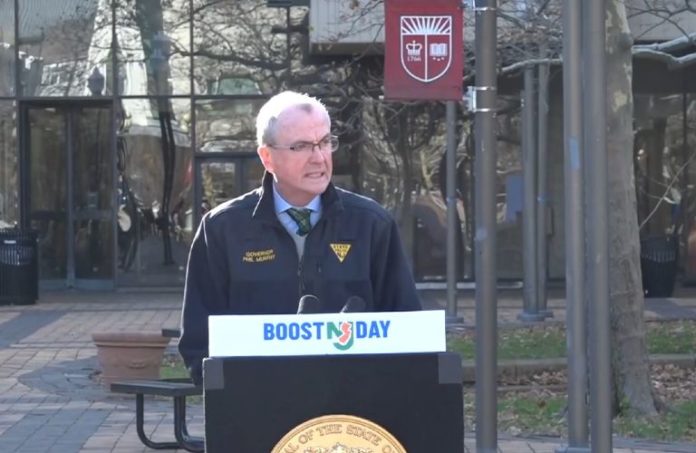 Gov. Phil Murphy was at University Hospital to recognize the one-year anniversary of the first COVID-19 vaccine given in the state.

Murphy is using the moment in an effort to rally those who still are not vaccinated — and now, those who have not gotten their booster. And, even though cases are rising, it figures to be a tough fight.

The latest Monmouth University Poll, released Wednesday morning, indicated a majority of Americans said they feel “worn out” by how COVID has impacted their daily lives, and nearly half feel “angry” about it.

Support for facemask and workplace vaccine mandates has declined since the fall, when the Delta variant started to dominate.

More so — and in what may be tough news for Murphy and other elected officials — this feeling also may be having an impact on how they view their political leaders’ handling of the pandemic.

Here’s a look at some of the numbers:

In regard to feeling worn out and angry, the results were as follows:

“The fact that Americans say they have had enough should be no surprise,” he said. “Every time we try to adjust to a new normal, another variant pops up to put us on guard again. This perpetual unease is having an impact on how we view those charged with handling the pandemic.”

While Murphy’s handling of COVID was not considered, the poll did not view President Joe Biden’s efforts well.

The public is now split on whether Biden has done a good job (46%) or bad job (46%). Prior to this poll, though, Biden’s ratings on the pandemic had consistently been in net positive territory, including as recently as last month (53% good and 41% bad).

These numbers may not speak well for Democratic candidates.

“We just came out of an off-year election in Virginia and New Jersey where blue states did not look so blue,” Murray said. “The failure to get COVID under control may be playing a role there, especially for independent voters, in a growing sense of frustration with the party in power.”