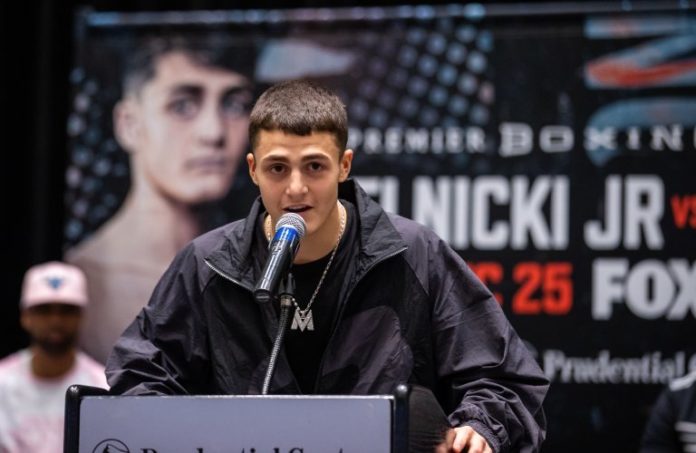 Christmas Day has long meant NBA action on TV. And, since Christmas falls on Saturday this year, the NFL is jumping in with two games, too.

What more could a New Jersey sports fan want?

Fox Sports, Premier Boxing Champions and the Prudential Center are hoping that will be the case, as a multifight card, featuring eight New Jersey fighters, will be held in Newark on Christmas night.

Roseland’s Vito Mielnicki, a rising welterweight contender, will be in the co-main event, scheduled to start at around 8 p.m. The undercard fights will begin at 4:15.

Dylan Wanagiel, who was brought into Harris Blitzer Sports & Entertainment earlier this year in the newly created role of vice president of sports properties and special events, has made combat sports (including boxing, wrestling and MMA) a top priority.

Wanagiel said this card fits the bill — and he’s confident it will draw attention, as it will follow an NFL game between Cleveland and Green Bay.

“I think they’re anticipating something like 30 million viewers for that game, so they feel it will be a very strong lead,” he said. “We were more than happy to accommodate them, especially with a card highlighted by so many local kids.”

The boxing card is not a one-off event.

Wanagiel brought boxing to the Pru Center earlier this year, as it held a card July 31 that also featured Mielnicki. The direct success of that event led to this opportunity.

“They really wanted to do something with Vito,” he said. “And, thankfully, our relationship with them was strong that we were the first call.”

That they wanted to do the event on Christmas Day wasn’t a problem, Wanagiel said.

Wanagiel said the arena will sell seats (starting at $50) in the lower bowl — and that sales are progressing.

“I think we’re going to have very strong energy in the lower bowl,” he said. “We will have hardcore boxing fans coming out, but we’re also distributing a lot of tickets to charities and schools in the local community so that everyone can come out and enjoy a fun Christmas night event.”

The goal, he said, is to show that the Prudential Center is a great venue for combat sports.

He said the Christmas card will serve as another example of the arena’s interest and ability to host boxing — and Wanagiel said he’s confident it will lead to more opportunities.

And Wanagiel jokingly pointed out that boxing on Christmas is not unprecedented. In fact, he laughed, there was even a heavyweight title fight.

“A lot of us remember that Rocky defeated Ivan Drago in ‘Rocky IV’ on Christmas Day,” he said.

Food for the hungry: How industry, labor and government are stepping...