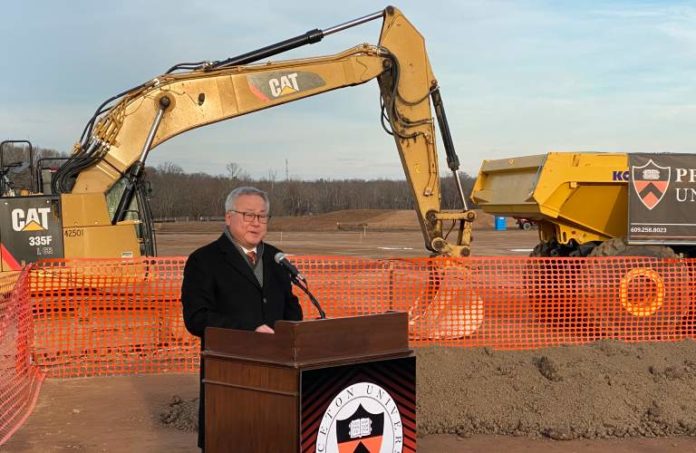 When Princeton University officials held the groundbreaking for the school’s Lake Campus development earlier this month, they spoke of how it was the first significant expansion of the college community in more than 100 years.

One hundred years from now, they hope others will speak of the development as a groundbreaking moment in sustainable development.

After centuries of using carbon-based heating technologies, campus officials say they are preparing to move to a new hot-water energy system driven by electric heat pumps, thermal storage and geo-exchange — one of the first in the nation to combine these technologies at this scale — across the university grounds.

The Lake Campus development, which will add housing for graduate students and athletic facilities for a number of teams, will be a completely dedicated geo-exchange campus.

(Click here for a deeper explanation of the geo-exchange process.)

Kyu Whang, Princeton’s vice president for facilities, told the crowd at the groundbreaking that the Lake Campus is a look into what can be a more sustainable future.

“On the land that we are standing on today, Princeton is creating what is truly a 21st-century campus,” he said. “We have the opportunity to build a sustainable campus, not only from the ground up, but from deep below the ground.”

Here’s how Princeton officials say they will do just that:

School officials said they hope the landscape design provides the setting for a unique integration with the larger Princeton campus, and with the D&R Canal State Park, with the design of the campus intended to contribute to the ecological role of the park corridor.

They said the project will add to sustainable efforts Princeton already is undertaking.

The university currently produces 4.5 megawatts of solar energy in West Windsor with the existing solar field. Whang said that total will be increased to 12.2 MW when two additional solar fields already under construction in West Windsor are completed. This will be nearly 75% of the university’s overall solar production capacity, he said.

Shana Weber, director of Princeton’s office of sustainability, said the Lake Campus goes to a broader effort and is part of a once-in-a-generation opportunity to lay the foundation needed to achieve “net-zero” greenhouse gas emissions before mid-century.

“Princeton has pledged to reach net-zero by its 300th anniversary in 2046 without purchasing carbon offsets on the open market,” she said. “This means that we are taking responsibility for our own campus-based emissions and the actions necessary to reduce them directly.”

Weber feels the university can show others the way.

“We want to demonstrate the kinds of infrastructure and planning changes that are necessary at a much larger scale than just the campus,” she said.

Ted Borer, director of Princeton’s energy plant, said there is no time like the present.

“If we don’t do something differently today than we’ve been doing all along, we’re going to be well past the date when our climate scientists are saying things are going to crash and burn,” he said. “So, we need to invest today to solve these problems. Even if you don’t already see it as an immediate crisis — and, personally, I do — we have to get started, because our investment will last longer than that.”

How the geo-exchange works

Princeton University is in the process of moving away from carbon-based heating technologies to a new hot-water energy system driven by electric heat pumps, thermal storage and geo-exchange. Princeton officials said the Lake Campus project will be one of the first in the nation to combine these technologies at this scale.

Here’s how the geo-exchange works:

Princeton officials said the new geo-exchange facilities, which will begin operations by 2023, will contribute significantly to reducing the university’s reliance on fossil fuels over time, using electrically driven heating and cooling heat pumps that eventually will be powered by carbon-free electricity from renewables, such as solar PV or wind.