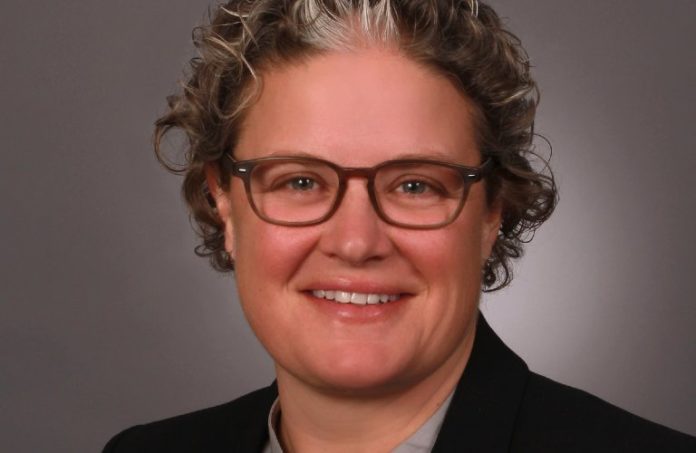 Cyndie Williams, a longtime member of the carpenters union with more than two decades of experience in various roles in the construction industry, recently was named the executive director of the Carpenter Contractor Trust, the first woman to be named to the post.

The Carpenter Contractor Trust at its inception was the result of collective minds who recognized a simple fact of the construction business: Cooperation between union carpenters and contractors would produce stronger, more predictable and ultimately successful results with the region’s construction projects.

ROI-NJ caught up with Williams to ask what’s in store for New Jersey’s infrastructure and what the union sees as some of its goals and challenges for the upcoming year.

ROI-NJ: What kind of upcoming plans are there for contractors in New Jersey?

Cyndie Williams: The infrastructure package that is coming to New Jersey is going to be a huge lift for our contractors. The monies that are circulating through bridges and roads, the water, you know, maintaining our systems and change out there. That’s big.

A carpenter’s scope is larger than what somebody would think is just a hammer and a nail-type situation. We are in all the major airports building those projects. And monies are trickling in for those as well as for rail systems, bridges and roads. It is a huge lift for our contractors that supply the workers in New Jersey for those particular packages. There’s also the idea of New Jersey being an innovator for the wind industry, with the clean energy movement for 2050, and, hopefully, that will begin to happen for South Jersey and all the way up the coast.

And airports. Newark airport right now has many of our contractors performing the construction of Terminal One. So, you know, the continued effort to make transportation more reliable for folks to get around is all a part of the big picture of our communities.

The CCT is aware of the ever-increasing changes in the construction industry and the economy at large. It is our mission to play a pivotal role in explaining to businesses and the public that union carpenters and contractors have a huge influence, not only on the economic impact at the macro level in New Jersey (and our other regions), but also in the trickle-down effect of the communities where they live.

There’s just so many ancillary jobs that folks don’t realize are part of our workers’ responsibilities to get done. Things like clean transportation in the ways of charging stations and bike lanes, to help procure clean transportation vehicles and infrastructure. I think that’s all important stuff for our communities.

Williams said the signing of the $1 trillion infrastructure bill by President Joe Biden also lays the path for construction jobs to be in high demand, as the bill was created to allocate money toward structural improvements in areas such as transportation and utilities, many of which will require the help of skilled carpenters.

Williams said that trying to educate school systems on recruitment opportunities and apprenticeship training opportunities is one of the big challenges the CCT has been working on. She is aware of the challenges the construction industry faces, especially those of recruitment and training, but her background puts her in a position to address these issues. She had served previously as representative of the United Brotherhood of Carpenters National Job Corps Training Fund, where she conducted onsite visits, safety inspections and negotiations with government entities, evaluated and hired instructors and performed community outreach.

ROI: OK, let’s talk about job recruitment — there’s a critical need for skilled workers to be able to complete for all those infrastructure projects. How are you going about and informing new blood that the CCT is a career opportunity they would want to enter?

An apprenticeship is not like a normal college or postsecondary education opportunity; you immediately start working and making money. It’s an incredible opportunity for somebody who wants to work with their hands. And career counselors in schools are helping to offer the opportunity to kids that are coming through high schools in vocational settings, which sometimes can even shave time off their apprenticeship. It’s real-life lock-step kind of introductory to the trades.

New Jersey has also caught on to the fact that we offer a good curriculum that is specifically geared to help the apprenticeship and recruitment effort. Apprenticeship schools are linked to college credits. There’s a lot of partnerships that are formed with our colleges and universities in that way, allowing people to earn college credits and degrees while training. And, honestly, we prefer that because it’s a well-educated member, and certainly somebody that will make them more valuable to our contractors.

I think just the idea that viable careers are in trades is a message we are continually trying to get out there. Our training center is proud of what it can offer, and the hope is that it will bring up the next generation of carpenters, because we are going to have a real gap in skill and we’re obviously seeing that now. There are people that are retiring, and the pandemic has also crippled us a bit with folks wanting to retire at an early age. And, so, certainly, we are looking for that new talent to come out of the schools and, with a good feeder program, we are wanting people to be exposed before they ever hit our apprenticeship school to apply.

I have been successfully engaged in building relationships with officials in the community, government and organizations to expand job opportunities for those who want to enter the construction industry. One of the most important messages that we can convey is that the carpenters union offers an inclusive culture that welcomes everyone to our industry while maintaining the highest standards of training and craftsmanship.

Other challenges that lie ahead that Williams hopes to address include the issue of how wage class affects the construction industry, and she hopes to be able to create a level playing field for honest contractors. Recruitment is an ongoing challenge, and the pandemic itself has brought about its own set of challenges that are being addressed, such as material and supply shortages, that add some new bumps in the road.