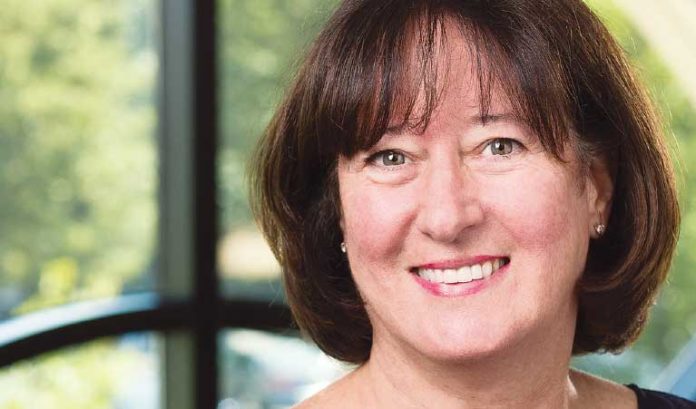 Patricia Costello has been invited to speak with judicial leaders around the world, including many with justice systems that are far different from what we have in New Jersey.

The takeaway — from remote regions in Africa, India and the Eastern Caribbean — always is the same: People have a lot of valuable thoughts to offer.

“I just find, over and over again, that I’m astonished by how much I learn on trips like that,” she said. “I’ve been to a couple of places you could call justice deserts, where they just don’t have the infrastructure or they are really desperately poor, but they’re doing something smarter than we are.

“Where we do things because we’ve always done them that way, they have to be more inventive, because they really need to be. I wind up coming home and saying, ‘They are ahead of us in this particular area.’

“So, it’s humbling, eye-opening and exciting to go to these different places. And it’s amazing how you can be in a room and need three interpreters but you’re still going to walk away with something if you listen.”

That’s the takeaway she hopes lawyers at Chiesa Shahinian & Giantomasi get from every meeting they have in 2022, when Costello assumes the role of managing member of the firm.

“My management style is to bring everybody to table, give everybody a free voice,” she said. “I love to get people around the table that come from different backgrounds.”

That’s not to say she doesn’t have a voice of her own.

“I’ve got a lot of ideas — I’ve got a lot of what I think are unusual ideas; I like to think outside the box,” she said. “But I want to hear everybody, really listen, not just give kind of homage to the idea of listening.”

And she doesn’t want to hear what people think she wants them to say. Costello jokes that even someone who seemingly always is negative is adding something positive.

Don’t be confused. Costello, who said she can be blunt to a fault, said she doesn’t want talk ideas to death. When it’s time to make a decision, she’ll make it.

“And everyone will have to get on board,” she said.

Costello, who will oversee a firm with more than $90 million in revenue and 175 attorneys among its 285 overall employees, as well as offices in New Jersey and New York, recently talked with ROI-NJ about her new role.

ROI-NJ: You assume the role at CSG at a time when the firm is riding high. Talk about the challenges and opportunities that come in that situation.

I wish it could be something more highbrow, in line with my new, queenly title, but I have to just tell you, it’s pizza. Everywhere I move, we find the perfect pizza place. And, right now, it’s Vic’s in Bradley Beach. (Her order: topped with sausage and peppers.)

ROI: I heard the phrase ‘a few tweaks.’ In the legal profession, that can mean changes in emphasis on practice groups. Are there areas at CSG you can see changing?

PC: I think our Labor & Employment area is going to grow and needs to grow. And I love the fact that we have really promoted our Family Law area. Every client you have has somebody somewhere in the family that needs that. That’s a natural, and most firms will not touch that, but family law is just so well integrated with other departments.

ROI: Sounds like CSG, which has been one of the fastest-growing firms in the state, will stay on that trajectory. The firm, like many others, has done well during the pandemic. But other firms have not. Talk about the impact the pandemic has had on the legal industry.

A firm like ours has a number of very wildly different practice groups. We can shift associates during the pandemic. depending on the need. So, part of the many reasons that we’ve thrived is everyone’s flexibility.

ROI: And that flexibility is about more than just picking up different cases — it’s been about how you pick them up. Talk about the technological changes that have come to the profession.

PC: A year or two ago, people would not have imagined that they were going to use Zoom, much less use it successfully. But everybody buckled down, everybody gave it a try. Even the reluctant people — which, by the way, were not always the oldest people — got the help they needed.

That’s the way we’ve practiced law in the last year and a half. Our technology department is of top quality. They have been so patient with people that needed help. That’s helped us be flexible.

ROI: Let’s turn to you personally. You came to CSG in 2015 — but you didn’t come from another firm. You served as the assignment judge in Essex County for 10 years, supervising all of the county’s trial and municipal courts, including more than 100,000 filings per year, 1,000 employees and a $55 million annual budget. How will that background shape you in this role?

PC: Some things are the same: Welcoming input, welcoming fresh blood and respecting the people that have been here a long time — the ones who have the institutional knowledge and can give us the information we need to know when we try to launch something new or fix something that needs fixing.

What’s going to be very different is this: In my prior life, I had to motivate people who I could not give a raise to or give an extra hour of vacation. In fact, I could not hire and fire most people. If I could motivate those types of people, I think I can do well in a place where I can actually reward people and incentivize them.

ROI: Last question — and for some, this is the biggest question. Your background is different in one other way: You are the first woman to be the managing member of a major firm in New Jersey. And it comes at a firm that has a strong record in gender equity (58% of the firm’s practice group leaders are women). How significant is that?

PC: I will say that, if a firm this size in the state were going to make this leap, it’s obviously going to be CSG. We’re already well-entrenched in dealing with women in the firm in a very positive way, so it shouldn’t be surprising that our firm took the leap.

But I’m not the first woman to become a managing member of a firm this size. There are many women in the country who are managing members of bigger firms than CSG. Thankfully, that barrier has been broken.

So, I hope that’s in the rearview mirror in about another week. I want to be past all that, where you’re being celebrated as the first this or the first that instead of just who you are.