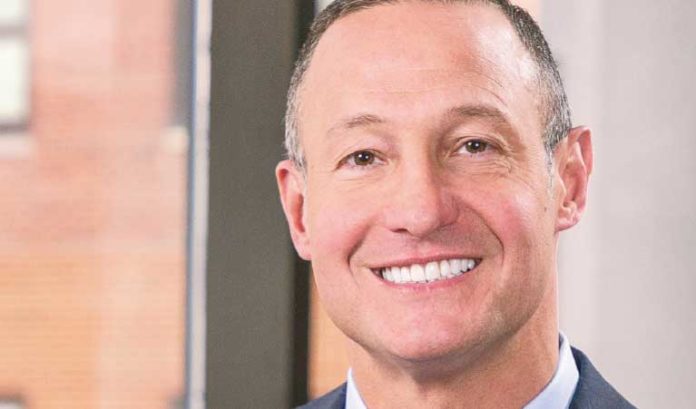 None is in Bergen County, where Englewood Health is located. But all three of these northern Hudson County towns are among the Top 10 towns for admissions to the hospital.

Then, there’s this statistic: Englewood Health has performed more than 150 heart surgeries this year for patients … from Essex County alone.

If you thought Englewood Health was just a small community hospital, think again. Under Geller’s leadership, the hospital not only has built a reputation that brings in patients from outside the county, it has begun a rapid expansion, enabling it to bring care outside of its home base.

Englewood has a large diagnostic and testing center in Glen Ridge. In the first quarter of 2022, it will open the Englewood Health ZT Systems Outpatient Center in Jersey City near the Journal Square PATH station. That center will have walk-in primary care with all of the medical subspecialties. And, by the end of 2022, Geller expects the facility to have a full-service imaging center as well as a full breast center and therapeutics.

Geller, who has been with the hospital for 13 years and took over as CEO in 2013, said the growth is by design.

“When I started out, we really had had a big focus traditionally on Bergen County,” he said. “But our growth has come from Hudson County, Essex County — and even western Bergen County, where we’ve opened ambulatory care centers, partnered with physicians and opened urgent care centers.”

The focus has changed the model of care — as well as the business model — at Englewood Health.

“When I first arrived here, health care was different,” he said. “It was the old way of counting heads in beds, and about 70% of our revenue came from inpatient care.

“We have spent the last decade-plus pushing the care out into the communities we serve, trying to keep people out of the hospital. And I’m proud to say now that, not only has our growth trajectory been double digits every year, but our revenue has reversed — 70% of our revenue is from outpatient services. It’s a totally opposite model of care.”

Geller recently spoke with ROI-NJ about all things involving health care. Here’s a look at the conversation, which was edited for space and clarity.

ROI-NJ: Talk a little bit more about the changing nature of Englewood Health’s model of care. How were you able to change it so dramatically in a decade?

Warren Geller: We did that by partnering with our physicians. I like to say that Englewood Hospital really doesn’t have any patients, our doctors do. So, we partner with our doctors, and hopefully give them a great environment in which to care for their patients and to work with us. And it’s been successful for us.

Back in 2011, we had about 35 doctors and a small medical group called Medical Associates of Englewood. Now it’s called EHPN, or Englewood Health Physician Network, and I’m proud to say that in 2022, we will have 600-plus providers — all fully integrated by one clinical information system called Epic. It’s been life-changing for the community.

I have to go with Derek Jeter. You can’t ask for a better brand ambassador for the sport, nor for my favorite team, my beloved (New York) Yankees. I had the privilege of watching him from his first callup back in 1995. It was pretty special. (Geller said his dad didn’t share his enthusiasm at first.) He told me, ‘I can’t believe they gave Frank Crosetti’s number to some kid.’

I have to go with ice cream. Nutella ice cream with sprinkles at Ice Cream on Grand in Englewood. It’s a fabulous seasonal ice cream shop and it’s truly the best. I get a double scoop of Nutella with both rainbow sprinkles and chocolate sprinkles.

ROI: We know that all of that growth outside of the Englewood area hasn’t come at the expense of the area around Englewood. Talk about what you are doing at the hospital and the neighborhood around it.

WG: We’re doing a lot here. We’re investing in our plant here on campus, the infrastructure you don’t see behind the scenes, as well as things you do see — like hybrid operating rooms, a new state-of-the-art ICU, more private rooms, traditional cath labs, electrophysiology, interventional radiology, more advanced operating rooms with navigation systems and robots. Those are the on-campus investments.

Off campus, it’s our ambulatory care strategy. We opened one this year to the west in Fair Lawn. We’re opening one next year in Englewood Cliffs. We’re opening the one I mentioned in Journal Square in Jersey City. And we have two other locations we’re currently scouting.

Those are just some of the ways we’re interacting with the people we serve.

ROI: What else are you doing?

WG: We’re opening the Shirvan Live Well Center, an education and health center, in downtown Englewood. There, we’ll be teaching things such as healthy cooking, helping people with pre-diabetes, helping them into the system — just creating access.

I like to say, build the top of the funnel so access is easy. If you do that, then good medicine becomes good business. Why? Because if you reach out to people proactively now, and say, ‘We’re here for you when you’re well,’ they’re going to be so much healthier in a decade from now. And that’s going to save a lot of costs in the system.

We did this on the vaccine front as well. We opened a large vaccination center up on the hill that was fabulously successful. But we also pushed vaccine sites out into the communities that didn’t have quite the same access. We went to Union City, we were in Cliffside Park, we were in downtown Englewood. We partnered with the federally qualified health center, because it was critically important that everybody had equal access.

ROI: Sounds as if you are doing incredible things — the type of things that would make you attractive to a larger system. Which leads to the elephant-in-the-room question: Englewood’s intention to merge with Hackensack Meridian Health was blocked by a judge this summer and is on hold. How are you proceeding?

WG: We are sticking to our strategic plan, regardless of the outcome of a potential merger with Hackensack Meridian Health, which of course, we would love to see happen. But we don’t want to get out in front of our skis. We need to continue to implement things that we can do as Englewood Health as we exist today.

ROI: That leads to another obvious question. Hospitals and health systems are businesses. And, although there has been incredible cooperation and coordination during the pandemic, the fact remains that you are competitors. Talk about that aspect of health care?

If I was out of something like disposable gowns, magically, one of our neighbors would pop a couple of pallets on our loading dock. And I would do it the next time. We happened to have a lot of respirators. So, we lent respirators to people; we lent masks to people. It was really nice to see people come together. Without being naïve, I wish we could be a little bit more like that going forward, but, indeed, we’re a business.

ROI: You’re a business whose business model — as you said — has changed quite a bit in the past decade. What do you think the next decade will bring? What will be the drivers of care?

WG: It’s two things. One, we need to do more to manage the cost, because it is such a large part of our economy. And it’s more and more difficult for people to afford health care services. So, we need to work together. And it’s not just the acute care providers, it’s the skilled nursing facilities, it’s the drug companies, it’s the insurers, we need to start to manage health care costs and make it more reasonable for everybody. Affordability is critical.

The other thing is population health management. It’s more than a buzzword. I recently was with the president of one of the major Medicare Advantage plans, and he was telling me that 30% of his expenses come from 2% of his members. Now, with all the data we have, we need to use artificial intelligence to see who’s at risk for falling into that 2% bucket — and figure out how long can we keep them healthy enough to keep them out. If we’re able to do that, it will save tens of millions of dollars locally, and billions of dollars across the world.

ROI: Of course, your business is about more than just keeping people healthy or curing them when they are ill. Everyone turned to you during the pandemic for answers. Talk about the role you played — and continue to play — during the pandemic?

WG: Early on in the pandemic, I knew that the community was scared, because we were all scared. There was a lot of unknown. So, we pushed our experts with their white coats out front and center. People wanted to hear from our clinicians, doctors, emergency department physicians and our infectious disease experts — and they delivered.

ROI: It sounds as if you’re looking to go above and beyond.

WG: It’s what we do — and what we do truly is a privilege. We’re in the people business. Our job, at the end of the day, is to help as many people as we can.

Insurance rates for small businesses going up – but not as...