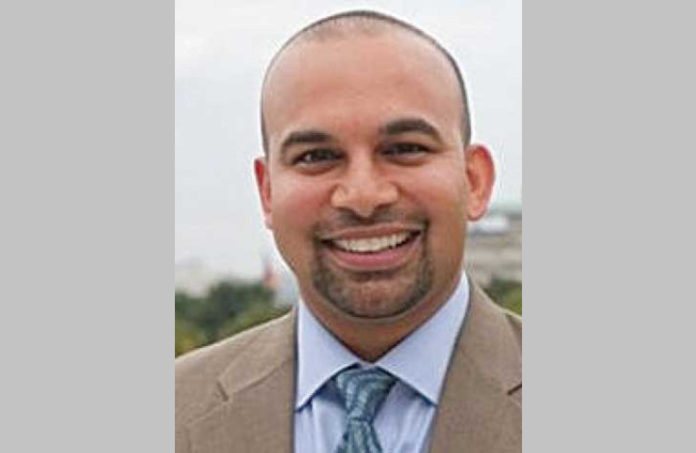 Wes Mathews, a career diplomat and economic development expert with ties to New Jersey, has been named the new CEO of Choose New Jersey, the organization announced Tuesday morning.

Mathews, who joined the U.S. Foreign Service in 2008, has served at American embassies and consulates in India, Germany, Saudi Arabia, Nigeria and Pakistan, as well as in Washington, D.C. He most recently served at the U.S. embassy in Riyadh, Saudi Arabia, as the deputy economic counselor managing bilateral economic and energy policy.

Mathews, on loan from the State Department, worked at the New Jersey Economic Development Authority from March 2018 through October 2019, helping establish the Office of International Trade and Investments.

Mathews appears to be a perfect fit for the job. Choose New Jersey, the state’s nonprofit economic development organization, has made the recruitment of international companies a top emphasis.

As the director and vice president of the Office of International Trade and Investments, Mathews was instrumental in advancing New Jersey’s international reach, overseeing efforts to attract foreign direct investment to the state and promoting New Jersey as a premier business destination.

Mathews was critical in opening markets and organizing trade missions to several countries. In addition, Mathews served as New Jersey’s liaison to the federal government on trade and investment issues.

Mathews succeeds Jose Lozano, who served in the role since June 2018 before leaving for a top job at Hackensack Meridian Health.

“I want to thank the Choose New Jersey board of directors for this incredible opportunity to advance New Jersey’s economy and attract new businesses to our state,” Mathews said. “Under Gov. Phil Murphy’s leadership, New Jersey is a major global contender for companies to grow and expand their businesses. I look forward to leveraging my experience to build upon the progress that Jose and the Choose New Jersey team made in recent years.”

Choose Chairman Ralph LaRossa, the chief operating officer of Public Service Enterprise Group, said he was thrilled to have Mathews join the team.

“Under Wesley Mathews’ leadership, Choose New Jersey will continue our important mission to strengthen and grow New Jersey’s economy and attract global businesses to our state,” he said.

“As Choose New Jersey makes the case to businesses around the world that New Jersey is the best place to do business, we believe that Wes’ extensive experience in foreign relations, international trade, investment and business development will be invaluable in advancing our organization’s mission.”

Murphy, well known for his time as U.S. ambassador to Germany, was equally pleased.

“As we rebuild and recover from the COVID-19 pandemic, it is more important than ever to share New Jersey’s story of innovation and advance the state’s presence in global commerce and industry,” he said. “Wesley Mathews’ experience as an American diplomat, with New Jersey state government and in the private sector will be instrumental in bringing new businesses and jobs to our state. We look forward to working with Wesley and Choose New Jersey to continue growing and strengthening New Jersey’s economy.”

Tim Sullivan, the CEO of the EDA, who worked previously with Mathews, said he is eager to do so again.

“Wes is an outstanding choice to be the next leader of Choose New Jersey, and I am looking forward to working with him to build upon the extraordinary partnership forged between Choose New Jersey under Jose Lozano’s leadership and the EDA during Gov. Murphy’s first term that led to so many successes for the state’s economy,” he said.

“When Wes was a part of our team at the EDA, he played a critical role in many of Choose New Jersey and EDA’s major initiatives, particularly Gov. Murphy’s successful trade missions to India, Germany and Israel — and, with his breadth of diplomatic and commercial experiences, I know he will be an extraordinary ambassador for New Jersey at home and abroad.”

Prior to joining the Foreign Service, Mathews worked in the private sector for Nortel Networks and FedEx in finance and business development roles. He is the recipient of several Department of State awards throughout his career, including multiple Superior Honor Awards for advancing U.S. economic diplomacy.

Murphy: All school personnel need to be vaccinated — or submit...