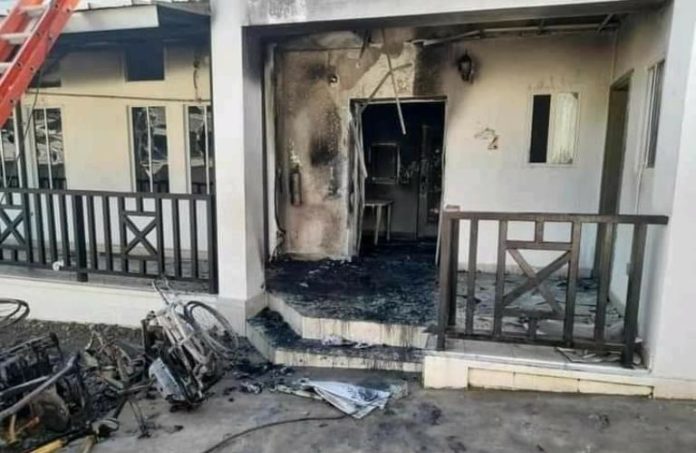 By the time the gang members got to the hospital — searching for the rival gang member they heard was being treated there — it was too late to stop them.

That’s the way it is Haiti, where mob rules are in effect.

But, until that late October day, it had never been like that at Hopital Sacre Coeur, the hospital in the northern region of the island that Holy Name has run — and financed — since shortly after a devastating 7.0 earthquake hit the island in 2010.

Holy Name CEO Mike Maron, who knows the region as well as any outsider — who knows how the 200-bed hospital may be the only economic engine for that part of the country — couldn’t believe it when he got the news.

“They really went through and ransacked the place,” he said. “They were breaking windows, they set fires. There were gunshots.”

The person didn’t survive in the hospital. His wounds were too much to overcome. He had died before the mob arrived.

But that didn’t stop the destruction. A few days later, the hospital had to close as a result of the damage.

For all the challenges Holy Name has faced in Haiti for the last decade — disease, hunger, poverty and a lack of basic services — Maron didn’t see this one coming.

“We were trying to find out why,” he said. “We were asking: ‘Why did you attack us? You’ve never attacked us.’ It was unprecedented.

“Was it us, was it this person — or was it all the other things going on there?”

Maron, who travels to Haiti routinely, but has not been there in a few months, never got a definitive answer — though he said one is easy to find. Adding the assassination of the president on top of a pandemic on top of some of the lowest living conditions in the world is not a recipe for prosperity or peace.

“It’s a real tragedy, what’s going on there,” Maron said. “There’s a lack of civility and a lack of any kind of reasonable governance — from the national level down to the local level. It’s all deteriorated.

“The country has slipped into very antiquated tribal and gang rule. And, since there’s no real rule of law or police force, the gangs have become more emboldened.

“There’s a breakdown of all the components of a civil society.”

Maron was determined to reopen. He and Holy Name haven’t come this far to walk away now.

So, after shipping off the patients to facilities he knows were nowhere near what Hopital Sacre Coeur could offer, he went about trying to rebuild.

On Dec. 15, Hopital Sacre Coeur finally reopened, with a ceremony that brought the minister of health to the hospital.

The bigger problem is fixing Haiti.

Thankfully, COVID-19 has not ravaged the country as it has here, Maron said.

Holy Name CEO Mike Maron said the health system has financially supported Hopital Sacre Coeur since it took over a decade ago.

“Holy Name has been funding it for the last 12 years,” he said. “That’s what’s given it stability. We’re not relying on erratic fundraising that ebbs and flows, depending on people’s interest or lack of interest in Haiti. We became the stabilizing factor.

“We do everything we can to try to fundraise for Haiti, but it’s getting more challenging because people are like: ‘It’s a lost cause. Why should I put my money in Haiti?’ And, when the money falls short, Holy Name is stepped up every single month and made sure payroll’s met and made sure medical supplies and drugs are there, so the hospital can continue on.”

“We do not see high COVID cases coming into the hospital at all,” he said. “We know it’s in the community, and we suspect it’s a milder version, but Haitians are an incredibly resilient people. They’re just fending it off on their own.”

They have bigger issues, too.

“Hyperinflation is through the roof and people are starving,” Maron said. “The hunger issue in Haiti now is greater than I’ve ever seen it. All of this is just crashing down on them. Your heart breaks when you see it.”

“When mobs get going, they lose all rationale,” he said. “Young, hungry, angry. It all just came out, and we were in the way — so, that’s where they took all that other emotion.”

Maron hoped to make the trip to Haiti for the reopening to speak to the members of the rival gangs. Instead, due to COVID and other logistical issues, he spoke to the community in a video message on Zoom.

“I said, ‘You cannot do this — you will scare away the last remaining people who want to help you,’” he told them. “There’s no one behind us.”

He said he tried to show all the good the hospital has done.

“My message to the people there was, we’re stronger than any one of these attacks,” he said. “It was very unfortunate, and we were very disheartened by it — but it’s not going to deter us.

“Reopening the hospital as quickly as we did was the punctuation mark to that statement.”