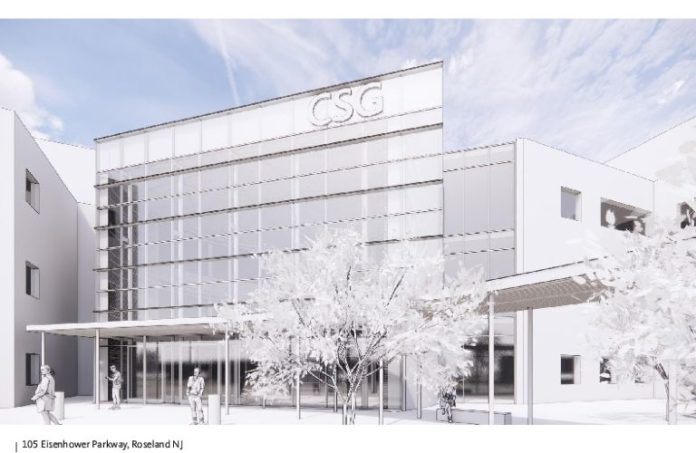 The third-largest law firm in New Jersey has committed to creating its new, state-of-the-art headquarters at 105 Eisenhower Parkway in Roseland.

Chiesa Shahinian & Giantomasi P.C. committed to a long-term lease at 105 Eisenhower Parkway, a two-building, four-story office complex that spans 220,000 square feet and was built in 2000. CSG Law signed on to occupy the entire North Building, which totals 109,000 square feet on floors one through four, according to a Friday announcement from Cushman & Wakefield.

Ownership, in conjunction with CSG Law, will be undertaking a lobby, common area and façade renovation that will include branding on the north side of the building. Additionally, the entry road and landscaping will undergo renovations. Gensler has been retained by both CSG Law and the landlord, a New York City-based private partnership, to manage these improvements. The law firm said it expects to take occupancy sometime in 2023.

“The custom design and build-out of the firm’s new state-of-the-art headquarters marks an exciting time for CSG Law, which has grown tremendously over the past few years,” stated Jeffrey S. Chiesa, member of the Executive Committee of Chiesa Shahinian & Giantomasi PC.

“This is a defining moment for the firm,” continued Francis J. Giantomasi, another member of the Executive Committee. “We are celebrating our 50th anniversary, while at the same time designing offices that will enable the next generation of lawyers to meet client needs in the future and continue the firm’s legacy.”

“One of the most respected law firms in New Jersey, CSG Law is an economic engine, employing 300 people and serving as a corporate anchor in our community,” said Joseph N. DiVincenzo Jr., Essex County executive. “The firm has deep roots in Essex County, which it has called home for half a century. I am proud that, when they were relocating their offices, they displayed their commitment to Essex County and chose to remain here.”

“CSG Law has seen explosive growth over the past five years, and this new lease will give them room to continue their expansion,” added Donnelly, an executive vice chair.