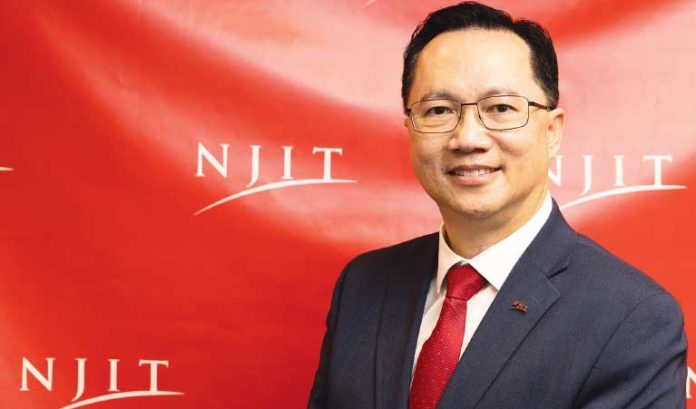 As someone who is trained as an engineer and the holder of three STEM degrees, Teik Lim said he knew all about New Jersey Institute of Technology’s reputation as a superior school for polytechnical education and as a public research institution.

So, when he got the call to interview to be the school’s next president, he jumped at the chance.

“This is an opportunity of a lifetime, a chance to get back to my academic roots,” he said.

But that wasn’t what truly sold him on the opportunity. When he toured the school and met with the board of trustees — most specifically, Chair Robert Cohen — he was thrilled to see the school embraced his other passion: business.

At all of his previous academic stops, including the University of Texas at Arlington (where he is finishing up his role as the interim president) and the University of Cincinnati (where he was the dean of the College of Engineering and Applied Science), Lim has made embracing and interacting with the business community his top priority.

It’s essential to a school’s success, he said.

“People sometimes think about higher ed as an organization that does a service, like a government entity,” he said. “An institution such as NJIT is a business. We have a mission that is different from profit or nonprofit, but we’re a business.”

One that runs like a business. Lim said that was apparent to him while speaking with the board.

“I found them to be very passionate, very forward-thinking and very collaborative,” he said. “I think it’s because of the nature of the board, which is so business-centric.”

Lim said he was impressed by the well-established and highly regarded New Jersey Innovation Institute and the school’s new $500,000 venture fund. He also found them familiar.

“When I first became interim president at UTA, my first project was creating a center for entrepreneurship and economic innovation,” he said.

He got money from the state and a philanthropist — and a “Shark Tank”-type entity was born.

“We gave out more prizes last year than MIT, Harvard, TCU and Rice combined in the same type of programs,” he said.

“I’m telling you this story because I believe that — in addition to being an engine of social mobility — one of the biggest roles of higher ed is to be an economic driver. We need to create companies that will stay in Newark and in New Jersey and be a positive contributor to the economy of this region. That is an absolutely critical thing.

“Think of all the smart people that we have at NJIT. Let’s harness that and make NJIT a hub for ideas and innovation — a proving ground to really help this region grow economically.”

There will be a connection to established businesses in the community, too. And it will be about so much more than just internships. Lim is all about collaboration.

“The businesses in this community and NJIT are joined at the hip,” he said. “They might not know it yet, but we are.

“Here’s what I mean: I’m ready to represent NJIT while building mutually beneficial partnerships that will further enrich the experience and education of our students and — at the same time — support innovation in businesses. That’s why I say, ‘mutually beneficial.’”

It’s higher education in the modern age, he said.

“Students are not coming to university to sit in a lecture hall and listen to a professor talk,” he said. “That’s important, but they are here to have the engagement, to build up a peer group that they can work with — and to learn from the best and the brightest in and outside of a classroom.

“So, the education and training of our students cannot be just on the backs of the faculty. It will have to have heavy reliance on external stakeholders, including corporations, nonprofits and alumni in town.”

He’s done it before — but only after changing the culture.

When Lim was at the University of Cincinnati, he changed the focus of the advisory board that was made up of influential alums in industry.

“I said, ‘I don’t want your advice until we start collaborating — I want your collaboration first, then I’ll take your advice,’” he told them. “That mindset changed the board. Some didn’t like it, so they left.”

“It is a collaboration laboratory,” Lim said. “And, with P&G, it combines the best features of industry and university. It has grown to one of the largest interdisciplinary research centers on any campus. And it yields a 10-fold return of investment for P&G, by their calculation.”

Lim is eager to meet with Newark business leaders to see how they can collaborate — in a mutually beneficial way.

“I want to be at a table every time there’s a discussion about education, workforce or economic development in Newark,” he said. “I want to see NJIT continue to strengthen its position here.

“(President) Joel (Bloom)’s done great work here and has really engaged the institution with the community. I want to blur that that division between NJIT and the community even more.”

Of course, being a university, the connection to business is about setting up students for careers in STEM companies, too. And, at NJIT, that means increasing the opportunities in STEM careers for those from communities that have been excluded in the past.

As the first person of color to hold the top job at NJIT, Lim feels he can have impact today — and tomorrow.

“For me, what’s important as the first president of color is that it gives me a platform to further enhance the institutional diversity, equity and inclusion plans so that we can make NJIT a truly welcoming and inclusive teaching and learning environment for people of all demographic and background,” he said.

“Why that is important? Because, once you can do that, you’re then able to change the demographic of STEM workforce. You start at the institutional level by bringing in a more diverse population and getting them trained for careers in STEM.

“I believe that talent is everywhere, but opportunity is not. We need to create an opportunity here.”

Lim pledges to do just that. With business by his side.

Incoming President Lim spells out his vision in an acronym

Incoming New Jersey Institute of Technology President Teik Lim said he has a full grasp of the growth of the school during the leadership of its outgoing president, Joel Bloom.

And he doesn’t want to mess it up.

“I’m working with him to ensure a smooth transition, so we don’t hit a bump in the road or skip a beat,” he said. “Given the strong foundation and the amazing ascension of NJIT under Joel, we now have a golden opportunity to further enhance and accelerate the rise of NJIT to become a preeminent public polytechnic research university in the region and globally.

“To address this challenge and seize on the opportunity, I have developed an acronym called IDEATE as an overarching strategy.”

I stands for INFRASTRUCTURE: That includes physical and virtual tools that we need to develop a digital campus that transcends space and time. The pandemic didn’t change the course of higher ed, it simply accelerated us into the future. The digital era came to businesses a long time ago. Now is the time for higher ed to catch up. Anyone that does well will be at the forefront of success.

D stands for DIVERSIFICATION: In the case, a diversity of revenue streams, which is critically important to the sustainability of NJIT.

E stands for ENROLLMENT STRATEGY: Our strategy and our growth must be based on discipline, degrees and modalities. It’s not just about first-time-in-college students coming here as freshman to get a degree. Some will be adults looking for upskilling. We need to be willing to have students coming during different paths of their life. Not everybody will come to NJIT for a degree. Some will seek a certificate. Some will just want a particular course.

A stands for ADVANCEMENT: That includes philanthropy and engagement. Either way, it’s all about relationship building.

T stands for TALENT POOL: Higher ed people will talk about publish or perish. I will tell the faculty that’s gone — out the window. Now, it’s either collaborate or perish. We need to hire top-notch people that are team players. I don’t want top-notch people that work in silos. I was telling some of the deans here, don’t hire somebody until another dean is interested in working with that candidate. We need collaboration.