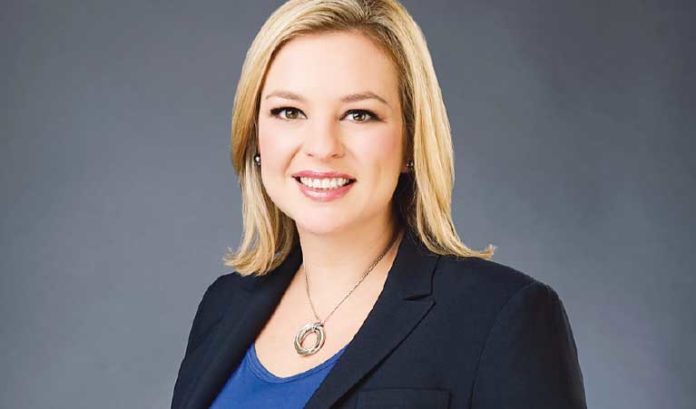 Rita Gurevich, founder and CEO of SPHERE Technology Solutions, based in Hoboken, came to the Jersey Shore Women in Tech meetup recently to talk with the members about mentorship. She noted that, in many cases, her own mentors had come from some unorthodox places, not the usual industry resources you would expect.

As background, Gurevich started SPHERE after working at Lehman Bros. and identifying a niche opportunity to help big, globally regulated companies get better control of their information. The company recently raised $10 million in a Series A round. (See our story here.)

The first mentor Gurevich mentioned was her mom.

“I definitely wouldn’t have started a company without her encouraging me,” she said.

She told the group that it doesn’t have to be a mom or dad, maybe a brother or sister or another family member you’ve known for a while.

“You need somebody to push you, because you are always going to doubt yourself,” she told the group.

She also had a friend named Ray who had started a business and was 15 years ahead of her in the process.

“When I told him I wanted to start a business, he said ‘Let me see your business plan,’” she said.

Gurevich didn’t know what that was. Her friend told her to download a template and fill it out as best as she could.

These were areas she hadn’t been exposed to in her big bank experience.

She said that Ray opened her eyes to the fact that, “from an execution perspective, there is a lot to think about.”

The next mentor Gurevich talked about was Adnane Charchour, formerly CEO and president of Scivantage, based in Jersey City, whom she met through the New Jersey Technology Council, now TechUnited: New Jersey. Charchour was a fintech CEO who was looking to advise a few companies.

“He became my work therapist,” she said.

She could vent to him about anything that was bothering her, as minor or as large as you could imagine.

“Everything from the guy downstairs messed up my lunch and now I don’t have time to eat to ‘I have a major HR issue on my hands and I don’t know how to handle it,’” she said.

“Knowing there is someone there who you can ask questions to, who doesn’t judge you, who isn’t going to impact your business (is important).”

Charchour is on the SPHERE board of directors, and has followed Gurevich along the company’s journey. He was instrumental in helping her close the deal for the company’s Series A round and helped her create favorable terms for the company, she said.

Another mentor was a customer, she said, which is very unorthodox.

“I think this is unique because you often put on a front to the people who are paying your bills,” she said.

Sometimes you get lucky, and a customer can become a friend, she said. And there can be situations where you can ask for their advice and opinion.

“Maybe you can pitch an idea at them, and they will tell you if you’re crazy,” she added.

Gurevich also counts her best friend, Jen, among her mentors: “I’ve known her for years and I trust her immensely.”

She said that her friend mainly helps out with people problems at work, providing her with an outside perspective.

The final mentor in Gurevich’s life was her first boss, Chad, who pushed her ahead and put her on a challenging team, all because he saw something in her that made him think she could do it. The stories she had from that experience were all about how she was able to capture the attention of her initial customer base within financial services, she said.

Gurevich discussed the overall mentorship environment, noting that 76% of people say having a mentor is important, but only half of them actually have mentors. The reason, she believes, is that we are busy with kids, families, dogs.

However, she advised the women in the group to carve out some time to either be a mentor or have a mentor, because it brings great value. Some 74% of women said that being a mentor enhanced their own career, she said.

And for mentors and her personally, “I wouldn’t have been able to succeed if I hadn’t talked to them.”

She noted that SPHERE has a formal mentorship program.

“We pair people up who want to be paired up,” she said. “… We’ve noticed that, not only are people who participate in mentorship more excited and more productive, but the soft skills get better, too. People get more comfortable speaking up, and they get more comfortable sharing ideas because they’ve tried it behind the curtains with somebody beforehand.”

And that lets them build confidence, she said.