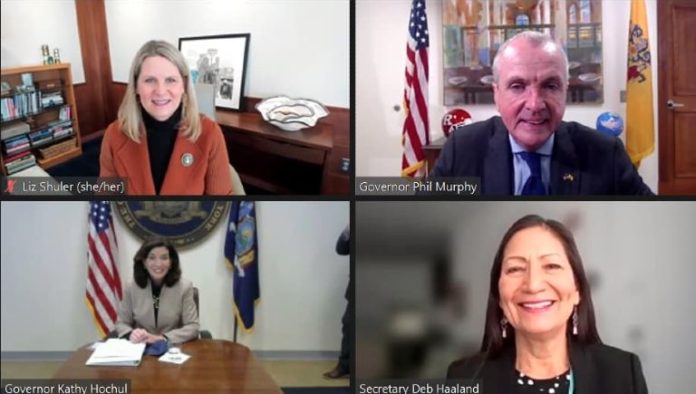 In another example of how the offshore wind energy sector is soaring — and how New Jersey will be at the forefront of it — U.S. Secretary of the Interior Deb Haaland announced Wednesday that the federal government will hold a wind auction Feb. 23 for more than 480,000 acres off the shores of New York and New Jersey, in the area known as the New York Bight.

The auction, to be conducted by the Bureau of Ocean Energy Management, will be the first offshore wind lease sale under President Joe Biden and Vice President Kamala Harris’ administration.

The BOEM said the auction will allow offshore wind developers to bid on six lease areas. The hope is that leases offered in this sale could result in 5.6 to 7 gigawatts of offshore wind energy, enough to power nearly 2 million homes.

Gov. Phil Murphy, who participated in a call regarding the announcement along with New York Gov. Kathy Hochul and others, reiterated his desire to make offshore wind a key component of the state’s green economy.

“Offshore wind holds the tremendous promise for our future in terms of climate change, economic growth, strengthening our work force and job creation,” he said. “New Jersey is already committed to creating nearly one-quarter of the nation’s offshore wind-generation market, and these transformative projects are proof that climate action can drive investments in infrastructure and manufacturing, while creating good-paying, union jobs.

“By acting on this shared vision, we can promote our joint offshore wind goals, and deliver benefits to residents of both states, particularly those in overburdened communities. Together, with this critical cooperation with the Biden-Harris administration and our state partners, we will turn this vision of becoming a leader in the global offshore wind market into a reality.”

“We are at an inflection point for domestic offshore wind energy development,” she said. “We must seize this moment — and we must do it together.”

The leaders suggested the collaboration will serve as a model for future engagement and establish the U.S. as a major player in the global offshore wind market.

A recent report indicates that the U.S.’ growing offshore wind industry presents a $109 billion opportunity in revenue to businesses in the supply chain over the next decade.

“Harnessing the power of offshore wind energy is integral to revitalizing regional economies, and it will guarantee that states along the Atlantic Coast will achieve their clean energy goals,” she said. “Increasing American offshore wind capacity to utility scale, as today’s announcement will do, heightens the need for planned transmission infrastructure, a critical component to efficiently deliver an abundance of offshore wind power to shore in a cost-effective way that minimizes environmental impact.

“With a limited number of locations that are well-suited to connect offshore generation to the grid, the need for planned offshore wind transmission infrastructure has never been greater. New Jersey and New York have been early leaders in the development of U.S. offshore wind, and we look forward to continuing our work with them and the Biden administration to build transmission systems that can reliably deliver offshore wind energy to American homes and businesses.”

“We’re pleased the New York Bight final sale notice has been published, a milestone that adds to the growing momentum across the U.S. offshore wind energy industry,” they said in a release. “New lease areas that promote coexistence among ocean users, in addition to the innovative ways BOEM is looking at encouraging a domestic supply chain and union labor, are all important pieces of the Biden administration’s offshore wind energy vision.

“As we build on our existing partnerships with New York and New Jersey, Ørsted is similarly focused on continuing to invest in the domestic supply chain and to utilize union labor in the construction of its projects.”